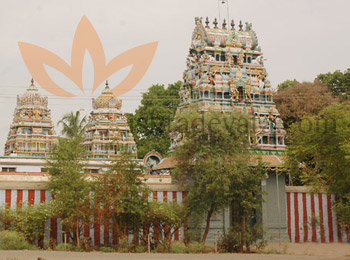 Amarapaneeshwarar Temple is dedicated to Lord Shiva. It is located at Pariyur, Erode District, Tamil Nadu.

The temple is built completely with marble stones. Sun God is facing east in the Navagraha shrine. Lord Shiva and Mother Meenakshi are in separate shrines in the prakara facing east. Lord Bhairava, Mother Durga, Lord Brahmma, Lingodhbava, Panchalingas and 63 Saivite Nayanmars are in the prakara. It is noteworthy that the famous Kondathu Kaliamman temple is near this temple. Lord Vinayaka in the temple is praised as Anukkai Vinayaka.

The temple is open only after sunrise as it is believed that Sun God and Devas worship the Lord early in morning. As Lord Shiva is pleased with those worshipping His devotees, people pray to Sun God first. This is a temple that emphasizes the importance of Sun worship. It is believed that all adverse planetary effects would disappear if one worships Sun first and go to Lord Shiva next.

Lord Shiva is facing west in the sanctum sanctorum. The Avudayar-stage on which Linga is placed- is on the right side. Mother Soundaravalli graces from Her shrine on the left side in a standing form. In between, Lord Shanmuga Subramanya graces with His peacock vehicle with its face turning left. Valli and Deivanai are with Muruga. This is known as Somaskanda form. Around the ghoshta wall of Muruga shrine, we can see five forms of the Lord as Karthikeya, Balasubramania, Dandayuthapani, Kumara Subramania and Bala Muruga.

Three powerful demons, Tharaka, Kamalakshan and Vidyunmali played all atrocities against the Devas who could not resist their powers. They sought the help from Lord Shiva for protection. Lord advised them to perform penance on Him. They installed a Linga and followed Lord’s advice. Lord waged a war against the three demons and saved the Devas. As He served the cause of the Amara (Devas), He is praised as Amara Pani Easwara – Amara-Devas, Pani-service and Easwara-God.

Devotees pray to Lord and Mother offering vastras to conquer enemies. It is the faith of the devotees that worshipping in Somaskanda temples as this one would wipe off doshas on wedding efforts and on children. Based on this principle, many remedial pujas are performed in this temple. Fathers and sons worship here for good relationship.

The nearest airport is situated at Coimbatore Airport.

The nearest railways station is situated at Erode Railway Station.

The rays of Sun fall fully on the Lord two days in the month of March during Sunset time as if he is worshipping in the temple.