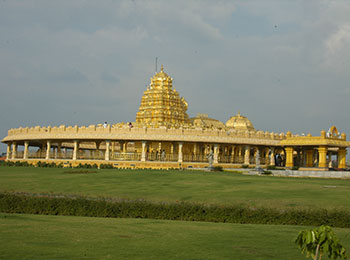 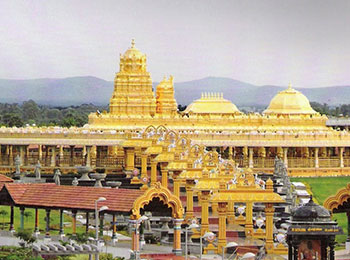 This temple is 500 years old. A unique and magnificent, artistically designed and beautifully hand painted temple has been built for Goddess Narayani, the first of its kind ever. This has been constructed over a period of four years and stands majestically at Thirumalaikodi. The "Gita" (Ancient Scripture) states that whenever there is turmoil on the rise and mankind is in the grip of "Adharma" (Vicious Force), Divinity manifests in human form in this world from age to age in order to re-establish Dharma (Righteousness) and to guide all mankind back on the righteous path. "Mother" is a universal embodiment of compassion, She extends her compassion, warmth and grace to protect and bless her children. God appears in many forms but to experience God in the form of a Mother brings a great deal of peace and joy. Divinity over the ages has descended on the earth in many forms. The manifestation in the form of the Mother over the ages has been recorded in the scriptures as "Kamakshi" at Kanchi,

"Meenakshi" at Madurai and as "Vishalakshi" at Kashi. In the present age known as "Kaliyuga" Mother has manifested as "Narayani" at Thirumalaikodi, near Vellore in South India. This Divine embodiment is now on the mission to re-establish righteousness and lead man on the spiritual path. The divine Mother incarnated on the earth in the form of our beloved Arul Sakthi Amma also known as Sri Narayani Amma, the Sakthi form of the Holy Trinity of Goddess Durga, Lakshmi and Saraswathi. Only the great merits of the good deeds of several births and the immense grace of Amma can lead a person to this Holy place. Visiting the Divya Kshethram (Holy Place) of Thirumalaikodi and taking the Darshan (Blessing) of Goddess Narayani and receiving a loving glance is truly the Ultimate blessing of Life. Devotees come from many parts of the world to take this precious opportunity to surrender and take refuge at the Lotus Feet of our Beloved Amma. In 1992, our beloved Arul Sakthi Amma predicted that a Swayambhu (a religious symbol that appears on its own accord) would manifest itself at Malaikodi.

To prove Amma's "Sathya Vaakku ", (Divine words of Truth), a great miracle took place on the 11th September 1992. On that beautiful evening around 6:00pm, there was a special gathering of very blessed devotees at Malaikodi. In the divine presence of our Beloved Amma, Mother Earth gave way, and there emerged a beautiful "Swayambhu". Blessed were all those who witnessed this Spectacular Divine Event and blessed indeed is the entire creation! Several weeks after the appearance of the Swayambhu, a "putthu" (anthill) began to emerge behind the Swayambhu. The Swayambhu temple was constructed around the Swayambhu and the anthill, and was consecrated on January 9th, 2000. Seated at the Gopuram (tower) of the Swayambhu Temple are the idols of the 18 Siddhas who had done great penance to the Divine Mother. Today, we can see the huge anthill, inside this Swayambhu Temple. The Divine mother is in the form of a snake blessing her children with good health. She protects her devotees from diseases and bestows the boon of children to women who do not have children. "Santhana Lakshmi " (Goddess of Children) is also installed inside the Swayambhu Temple, just behind the anthill. An Akhanda Deepam (Eternal Lamp) is always burning bright in this Sannidhi (shrine), showing light to all the spiritual aspirants. Going around inside the Swayambhu Temple bestows the devotees with the grace of the Divine Mother and the 18 Siddhas. Amma's Arul Vakku (Divine Prophecy) is that grievances of people would be reduced if they worshipped the Goddess after pouring ghee in the Akhandha Deepam located in the Swayambhu Temple and walked around the Swayambhu nine times with prayer in their hearts. 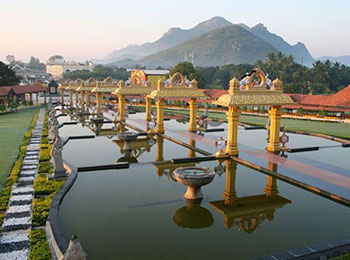 The Moolavar of this temple is Lakshmi Narayani. 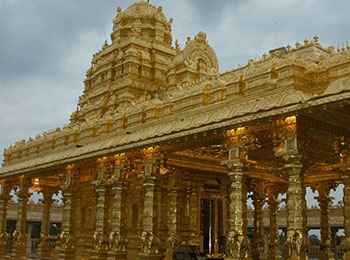 Vaikunda Ekadasi is grandly celebrated in the temple in December-January 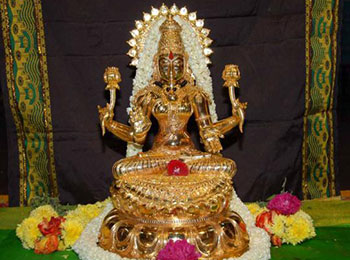 Puja for Goddess Narayani is performed in the Shanthi Mandapam. It is considered a rare blessing to witness this Puja, which lasts for approximately 4 hours. Each day hundreds of people come to the Peedam in Malaikodi to witness this Puja. Many sit and observe in silence, some would worship the Goddess by chanting “Om Namo Narayani” in their minds.

When Amma performs puja, Amma brings the entire Universe into Amma’s body and mind. The puja is performed on behalf of the Universe and it has to include all the elements, and the rituals inspired from within. Amma does Abhishekam (bathing), Alankaram (decorating) and Deepa Aradhana (lighting of lamps) in a particular order.

Amma teaches mankind that all life forms have a purpose and man should live in harmony with them. One should also express gratitude to nature and the five elements as they form the very basis on which all life forms are supported.

After the Puja all the devotees would line up for Darshan (Divine Vision and Blessing) and to receive the holy water (Theertam) from Amma. Depending on the crowd, some days Amma would distribute the holy water for hours to the hundreds of devotees that came.

Many devotees narrate their problems to Amma and look for guidance while they receive the holy water. Many of them say that the holy water has had miraculous effects: - chronic diseases have been cured, mental anxiety reduced, problems disappear and many find a great inner peace.