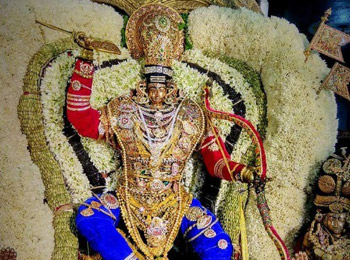 Presiding deity Lord Subramanya also known as Kangeyan graces from the sanctum sanctorum along with His consorts Valli and Deivanai in wedding form. There are special Dwarapalakas (security men) and an entrance for him. Devotees offer their first worship to saint Arunagiriar before going to Lord’s shrine. The Rajagopuram is of five tier type. Sri Vinayaka of the temple is praised as Sundara Vinayaka.

Muruga devotee Malayadasar, father of Sri Kirupananadavariar, popular spiritual leader of Muruga cult during our times, approached one Lokanathar known as Tirupugazhswami in Tiruvannamalai seeking his help to construct a tower to this temple. Malayadasar was asked to come next year for the purpose. When he went again, the Swami gave Malayadasar one rupee with Vibuti Prasad and advised him to start the work. Work progressed with the grace of God and the Tower construction was completed successfully. The Adhishtanam-Samadhi of Kriupanandavariar is opposite the temple.

Devas prayed to Lord Shiva to protect them from the atrocities of the demons. Lord Shiva created six sparks from His forehead eye. Vayu and Agni took them and left in Holy River Ganga. Six children came from the sparks then and were taken care of by Karthika maidens. Mother Parvathi then came there and embraced the children together which became a single child with six faces and named Kangeayan. Lord Muruga graces in this temple with this name.

Masi Brahmmotsavam in February-March, Vaikasi Visakam in May-June and Thai Poosam in January-February - the festivals celebrated in the temple.

On the Chithirai Tamil New Year Day falling almost on April 14, Lord Muruga grants darshan in the northern side of the Rajagopuram. As North belongs to Kubera the Lord of Wealth, it is believed that this darshan would bring in the devotee all prosperity throughout the year. Aipasi Skanda Sashti is celebrated for 8 days in October-November. After the Surasamharam day, Lord Muruga-Valli wedding is celebrated followed by the wedding with Deivanai the next day.

When saint Arunagiriar came to this place, after completing his pujas, offered curd rice as nivedhana to Lord. Six Muruga devotees came there at that time to whom the nivedhana was given. It is believed that Lord Muruga Himself came as the devotees to have the nivedhana. Based on this event, even today, curd rice nivdhana offered to Lord Muruga each day are offered to six devotees with Annadhana-feeding.

Those facing adverse effects of planet Mars – Sevvai - pray to Lord Muruga on Tuesdays with garlands of red flowers and offer curd rice as nivedhana.

The Near By Airport is Chennai Airport.

Kangeyanallur Vilakku is 5 km from Vellore. Buses are available. The temple is 2 km from this Vilakku bus stop.