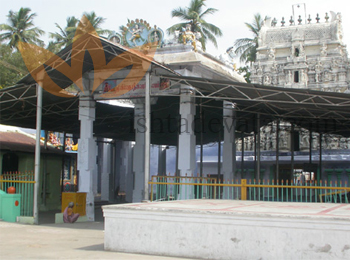 This temple is a paadal petra Sthalam. It is located 120 Kms from Chennai. Thiruvalam also known as Thiruvallam, an ancient Temple Town built around Sri Dhanurmadhyambigai Sametha Sri Vilavanadeeswarar Temple, is part of Vellore City.The Nandi is said to be guarding the temple priest from a rakshasan Kanjan of Kanjamalai nearby. This relationship with the demon who later surrendered to the deity is enacted in the month of Capricorn. Avvaiyar is said to be associated with this shrine, and Vinayakar is said to have obtained the celestial mango from Shiva here. Vinayakar's circumambulation of Shiva here caused the name Tiruvalam. This is one the 274 Shiva temples praised in Thevaram hymns.

This is a big temple covering an area measuring 5 acres with a 7 tier Rajagopuram-main tower. Lord Valampuri Vinayaka, Lord Vishnu, Lord Muruga, Sahasralingam, Lord Meenakashi Sundareswar, Bhairava, Sun and Padaleswarar have their shrines in inner corridor. Nandi is big in size facing east. There are several shrines in this temple. Although the presiding deity faces the East, the temple entrance faces the South. Inscriptions reveal that this was a grand pilgrimage center in the past with facilities for pilgrims travelling between Southern Tamilnadu and Benares. Sambandar's patikam honors this shrine, while Appar has referred to this shrine in a Patikam. There are several stone inscriptions in this temple, some from the peirod of Rajendra Chola I (11th century). A fine image of Perumaal also adorns this shrine.The temple is Small and beautiful in 19 Cent land. There is a three tier Kopuram in front of Krupanatheswarar Sannithi. The main entrance is opposite Krubapureeswarar shrine. While Sage Agasthya installed Thalapureeswarar, his disciple Pulasthya installed another one nearby named Krubapureeswarar on a square peetam. Both are revered as the presiding deities as one Siva. Thalapureeswarar, worshipped by sage Agsthya is worshipped as the first and prominent deity. Both are under Gajabrushta vimanam – roof above the sanctum with three Kalasams on each. There is only one Palli room. Dhaksnamurthy in the Krupanatheeswarar shrine is a unique one. Right hand hanging down and the right hand kept on the folded right leg showing the Abayahastham with the sinmuthirai. On the south pragaram we can see Nalvar and Sekilar peruman, on the west pragaram Vinayakar, Subramaniar and Lakshmi shrines are there. On the east pragaram Natarajar, Amirthavalli Ambal and Krupanayagi Ambal shrines are there facing south. Palli aria is present in the same pragaram. Near the Sthala Viruksham Kodai Muneeswarar shrine is there.

Valam in Tamil means circumambulation. This is the place where Lord Vinayaka established the truth that ‘world’ means Father and Mother and ‘Father and Mother’ mean world. He went around his divine parents to show this truth. As He did the Valam here, the place came to known as Tiruvalam and changed as Tiruvallam. Lord Vinayaka got the mango fruit from Lord Shiva this way and is praised as Kani (fruit) Vangia (getting) Pillayar (Vinayaka). He is sitting on His mouse vehicle. He came to this temple with the Mango fruit – the wisdom fruit. Saint Arunagiriar has sung in praise of Lord Muruga of the temple in his Tirupugazh. There is a tub-like structure on the right of Lord’s shrine filled with water in which Lord Jalakandeswara graces in the name of Padalalingeswara. Pujas are performed to Him praying for rain. The monument of Sage Sanaka, disciple of Lord Dakshinamurthy is between Nandhi and Lord Vilwanatheswara shrine. It is believed that meditating here relieves the devotee from sins of his/her past birth. Also Saint Sivananda Mauna Guru Swamigal performed penance here sitting under the jack tree in the temple. There is a mutt for him near the temple. Special pujas are performed to the Swayambulingas in the Kanjan hill on all full moon days. The event of Lord granting salvation to Kanjan at the eight places where his limbs fell is celebrated on the third day of Pongal festival.

A priest living in Tiruvallam was fetching water from Kanjan Hills for Lord’s abishek. Demon Kanja was giving him all troubles on the way. Responding to the prayer of the priest, Lord Shiva directed Nandhi to control the demon. Nandhi tore the demon into eight pieces. But, with his deathless boon from Lord Shiva, the demon escaped. Nandhi is facing the entrance of the temple (not facing the Lord according to tradition) to prevent the demon entering the place and the temple.

Full moon nights are considered to be special here. The annual Bhrammotsavam is celebrated in the Tamil month of Maasi. Shivaratri, The Float Festival, Navartri, Thai Poosam are the festivals of significance here.

Devotees perform abishek and archanas to Lord and Mother and offer Vastras.

As Lord Shiva is named Vilwanatheswarar, Vilwa leaves are offered as Prasad. Consuming the Prasad, according to faith, relieves devotees from dullness and skin problems and ensures child boon and wisdom.

The nearest airport is at Chennai. Tiruvalam railway station is on the Chennai - Katpadi Jn. section of the Southern Railway. The temple is about 2 Kms from Tiruvalam railway station. It is about 10 Kms from Ranipettai on the Chennai - Chittor - Bangalore Highway. Bus services from Arcot, Walajah and Ranipettai are available to go to Tiruvallam. The temple is very near from Tiruvallam Anna bus stand.