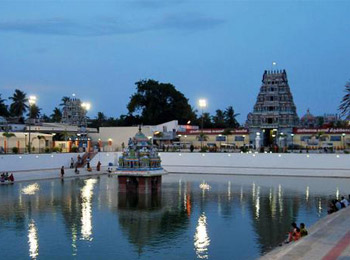 Karaikal Ammaiyar Temple is a Hindu shrine dedicated to the Punithavathi Devi. It is located on Bharathiar Street, of central Karaikal, India. Ammaiyar or Punithavathi Devi is one of the renowned goddess of Karaikal.

Thumburu was a great musician who played the Veena. He had a daughter named Sumathi who was a staunch devotee of Lord Shiva. One day as sh was penancing, she failed to notice the arrival of Sage Durvasa. The sage who is known for his temperament, cursed Sumathi that she would be born in the earth. Hence, Sumathi was born in the name of Punithavathi. Lord Shiva himself had called her Ammayar and since she belonged to Karaikal, his great devotee came to be praised as Karaikal Ammaiyar. Karaikal Ammaiyar is the presiding deity of this temple.

According to Legends, Karaikal was once called Karaivanam, where a couple Dhana Duttan lived and Darmavathi. Sumathi was born to them as Punithavathi. She was a staunch Shiva devotee since her childhood. She was married off to a trader named Parama Dutta. Punithavathi’s devotion towards the Lord had not changed a bit even after her marriage. Lord Shiva, who wanted to test her devotion, sent two mangoes to Paramadutta through a devotee. Paramadutta in turn sent it to his house. Lord Shiva disguised as an old Shiva devout visited Punithavati’s house for alms. She was too happy to offer him one fruit.

When Paramadutta came home for lunch, Punithavati served him the remaining fruit. As it was so sweet, Puaramadatta asked for the other fruit. Punithavati was in an awkward situation since she dint have the other mango. She immediately begged the Lord to help her manage the situation. A mango then suddenly fell at her hands, which she served to her husband. The second mango was sweeter than the first one. Paramadutta asked his wife about this and thus she told him the truth. Paramadutta who dint believe Punodhavathi’s tale, demanded her to get one more mango from Lord Shiva. The benevolent lord blessed punidhavathi with another mango to surprise of Paramadutta. Paramadutta realised the divinity of Punitavati and he felt could no longer be husband her. Thus he parted ways with her. He left the place without informing anyone and married another woman. They had a girl child whom he named Punithavati.

Punithavati who came to know about this, came to Paramadutta to call him back to her. Paramadutta simply fell at her feet, respecting her divinity. Punithavatiar was very much dejected and prayed the Lord to grant her with old age, taking away her youth. She was thus transformed into an old lady as requested. She then heard a voice directing her to proceed to “Kailash”, which is the sacred abode of Lord Siva. Since Mount Kailash is a sacred place, Punithavathiar choose to walk all the way by head instead of by foot, since walking by foot would amount to disgrace the holiness of the place by stamping. Lord Shiva who was completely moved by her devotion, came to receive her himself and blessed her with his divine dance ( Thandavam). A temple was built later at Karaikal which is her birth place.

The Mangani Tirunal festival (the festival of the mango fruit) is observed in the Tamil month of Aani on the full moon day in this temple. Karaikal Ammaiyar gave Annam (food) and mango to Bhikshatanar who begged alms. Since she offered Lord Shiva with curd rice and mangoes, these items are distributed during this festival.

How to reach Karaikal Ammayar Temple

The temple lies very near to the Karaikal bus stand, hardly a kilometer from it.

The nearest airport is the Chennai International Airport.