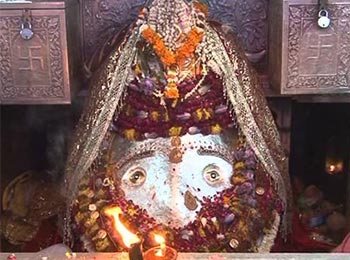 Kalkaji Mandir, also known as Kalkaji Temple, is a Hindu mandir or temple, dedicated to the Hindu Goddess Kali. This temple (mandir) is situated in the southern part of Delhi, India, in Kalkaji, a locality that has derived its name from the temple and is located opposite Nehru Place business centre. The temple is accessible by public transport on Kalkaji Mandir (Delhi Metro) and is near Bus Terminus-Nehru Place and Railway Station-Okhla. The general belief is that the image of the Goddess Kalka here is a self-manifested one, and that the shrine dates back to Satya Yuga when the Goddess Kalika had incarnated and killed the demon Raktabija along with other giant demons.

Kalka or Kalkaji Mandir is amongst the oldest and the most revered temples of India.[citation needed] The temple is dedicated to the goddess Kalka or Kali, an incarnation of Durga. It is also called 'Jayanti Peetha' or 'Manokamna Siddha Peetha'. 'Manokamna' literally means desire, 'Siddha' means fulfillment, and 'Peetha' means shrine. So, it is believed to be the holy shrine where one gets the blessings of Maa Kalika Devi (Goddess or Mother Kalika) for the fulfillment of one's desires.

The temple complex is situated on Kalkaji Mandir (Delhi Metro) between the Nehru Place bus terminus & business center and Okhla railway station & industrial area, and is right beside the Bahai Lotus Temple. Close by to the temple, on a hill in the East of Kailash neighbourhood and near the ISKCON temple, lays an Edict of Ashoka, dating 3rd century BC.

While the Hindu scriptures have multiple references and legends regarding the birth and acts of the Goddess Kali, the legend which tells about the circumstances attending to the birth of Maa Kalika Devi at the Kalkaji Mandir. Millions of years ago, the gods who dwelt in the neighbourhood of the present temple were troubled by two giants and were compelled to prefer their complaint to Lord Brahma, 'the god of all'. But Lord Brahma declined to interfere, and referred them to the Goddess Parvati. Out of the mouth of Maa Parvati sprung Kaushki Devi, who attacked the two giants and slaughtered them, but it so happened, that as their blood fell on the dry earth thousands of giants came into life, and the battle was maintained by Kaushki Devi against great odds. Maa Parvati took compassion on her offspring and out of the eyebrows of Kaushki Devi came maa Kali Devi, 'whose lower lip rested on the hills below and the upper lip touched the sky above. She drank the blood of the slaughtered giants as it poured out of their wounds; and the goddess obtained a complete victory over their enemies. Maa Kali Devi then fixed her abode here, and she was worshipped as the chief divinity of the place.

It is believed that the Goddess Kalkaji, pleased with the prayers offered and rituals performed by the Gods on the advice of Lord Brahma, appeared on this mount, known as Surya Koota Parvata, and blessed them. Ever since, the Goddess took this holy place as her abode and has been fulfilling the wishes of her devotees. During the Mahabharata, Lord Krishna and the Pandavas are said to have worshipped this Goddess during the reign of Yudhisthir.

The celebration comes during the festival of Navratri. This is a nine day festival, during which a large fair is organized here.

How to reach Kalkaji Temple

All Days temple will be opened from 6.00 am to 10.00 pm (best to visit during the morning and evening aarti).