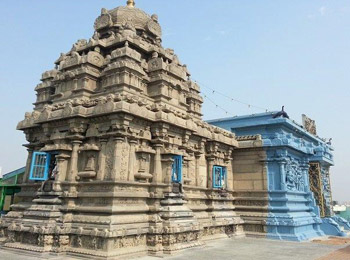 
The main temple within the complex, formally called Sree Swaminatha Swami Temple, houses the sanctum sanctorum of Lord Swaminatha. It is situated atop a small hillock in Sector-7 R.K. Puram and overlooking Vasant Vihar in South West Delhi. This is in keeping with the tradition of locating Murugan temples on hills. Besides the main Swaminatha Swami Temple, the complex contains temples dedicated to Sree Karpaga Vinayagar (elder brother of Lord Swaminatha), Sree Sundareswarar (father of Lord Swaminatha) and Devi Meenakshi (mother of Lord Swaminatha). These subsidiary temples draw inspiration from the Pandya style of South Indian Temple Architecture, as can be seen at the historic Meenakshi Amman Temple in Madurai, Tamil Nadu. In the Hindu religion, the peacock is considered Lord Swaminatha’s mount or vahana. Accordingly, the temple has adopted a peacock as its pet. This peacock can be seen and heard among the trees and foliage within the temple compound. This is very beautiful temple, it has touch of south India and south Indians visits this temple lot.


The temple complex of the Presiding Deity was consecrated and the Maha Kumbhabhishekam was performed on the 7th of June, 1973. The temple of Sree Karpaga Vinayakar, Sree Sundareswarar and Devi Meenakshi were consecrated and the Maha Kumbhabhishekam performed on the 13th June 1990. The Navagraha Sannidhi along with a Sannidhi of Idumban was consecrated on the 7th of July, 1995. Sree Adi Sankara Hall was inaugurated on the 9th of November, 1997. The third Punarudharana, Ashtabhandhana and the Swarna Rajathabhandana Mahakumbhabhishekam of the temple was performed on the 27th of June, 2001. The year 2007 was unique in the annals of the Temple. An Eka Koti Archana was performed with all solemnity and intense devotion. One crore recitals of the sacred Namavalis of Lord Swaminatha Swami uttered in the sonorous and harmonious unison by twelve learned Sivacharyas continuously for 120 days, for the benefit of not only the participating devotees, but also to the people at large, the country and above all humanity as a whole. It is the earnest belief of the devotees that with the successful completion of the Eka Koti Archanas, the sanctity and dignity of the temple has increased manifold.


As the years went by, the South Indian population increased manifold and the Shashti festival became very popular. The attendance swelled into thousands and the need for a temple began to be keenly felt.


During this period major part of the Lord Swaminatha rituals are performed. Archana, Aarti and Abhisekham are the daily pujas performed.