The Akshardham or Swaminarayan Akshardham complex is a Hindu mandir, and a spiritual-cultural campus in New Delhi, India. Also referred to as Delhi Akshardham or Swaminarayan Akshardham, the complex displays millennia of traditional Hindu and Indian culture, spirituality, and architecture. The temple, which attracts approximately 70 percent of all tourists who visit Delhi, was officially opened on 6 November 2005 by Dr. A.P.J. Abdul Kalam] It sits near the banks of the Yamuna adjacent to the 2010 Commonwealth Games village in eastern New Delhi.[6] The temple, at the centre of the complex, was built according to the Vastu shastra and Pancharatra shastra. The complex features an Abhisheka Mandap, Sahaj Anand water show, a thematic garden and three exhibitions namely Sahajanand Darshan (Hall of Values), Neelkanth Darshan (an IMAX film on the early life of Swaminarayan as the teenage yogi, Neelkanth), and Sanskruti Darshan (cultural boat ride). According to Swaminarayan Hinduism, the word Akshardham means the abode of God and believed by followers as a temporal home of God on earth 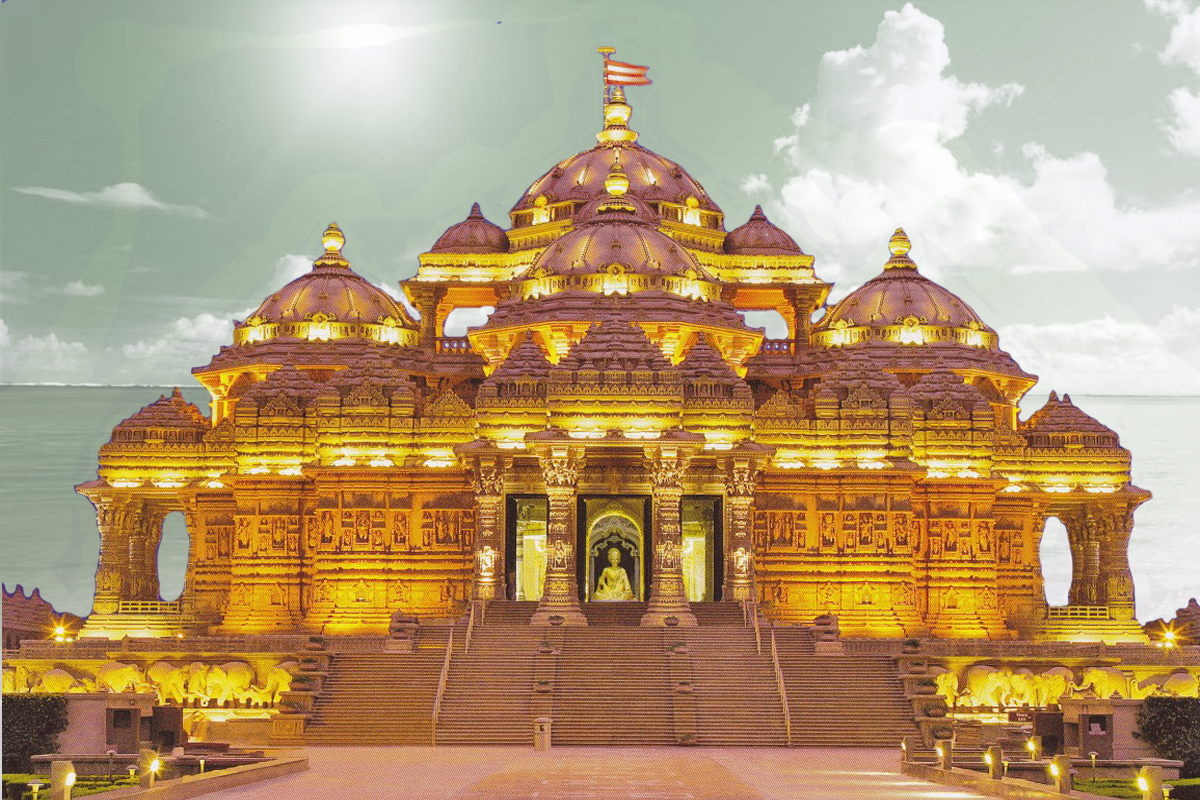 The main attraction of the Swaminarayan Akshardham complex is the Akshardham Mandir. It rises 141-foot (43 m) high, spans 316-foot (96 m) wide, and extends 356-foot (109 m) long. It is intricately carved with flora, fauna, dancers, musicians, and deities. Designed in accordance with the standards of Maharishi Vastu Architecture, it features a blend of architectural styles across India.It is entirely constructed from Rajasthani pink sandstone and Italian Carrara marble. Based on traditional Hindu architectural guidelines (Shilpa shastras) on maximum temple life span, it makes no use of ferrous metal. Thus, it has no support from steel or concrete.

The mandir also consists of 234 ornately carved pillars, nine domes, and 20,000 murtis of sadhus, devotees, and acharyas. The mandir also features the Gajendra Pith at its base, a plinth paying tribute to the elephant for its importance in Hindu culture and India's history. It contains 148 life sized elephants in total weighing a total of 3000 tons. Under the temple's central dome lies the 11-foot (3.4m) high murti of Swaminarayan seated in abhayamudra to whom the temple is dedicated. Swaminarayan is surrounded by images of the faith's lineage of Gurus depicted either in a devotional posture or in a posture of service. Each murti is made of paanch dhaatu or five metals in accordance to Hindu tradition. The temple also houses the murtis of Sita Ram, Radha Krishna, Shiv Parvati, and Lakshmi Narayan. 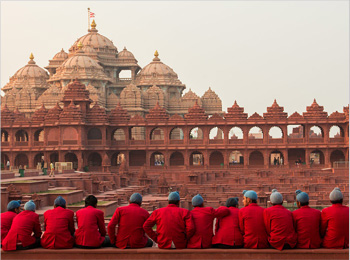 The Hall of Values features lifelike robotics and dioramas which display incidents from Swaminarayan's life, portraying his message about the importance of peace, harmony, humility, service to others and devotion to God. Set in 18th century India, the audience experiences eternal messages gleaned from ancient Hindu culture such as non-violence, vegetarianism, perseverance, prayers, morality, and family harmony through 15 3-D dioramas which make use of state of the art robotics, fibre optics, light and sound effects, dialogues, and music. The hall also features the world's smallest animatronic robot in the form of Ghanshyam Maharaj, the child form of Swaminarayan. 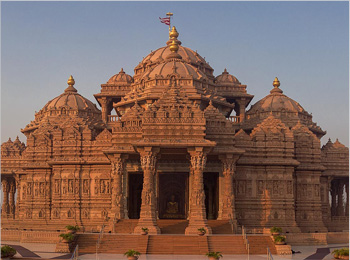 The theatre houses Delhi's first and only large format screen, measuring 85-foot (26 m) by 65-foot (20 m). The theatre shows a 40-minute film specially commissioned for the complex, Neelkanth Yatra, to recount a seven-year pilgrimage made by Swaminarayan made during his teenage years throughout India. Mystic India, an international version of the film produced by BAPS Charities, was released in 2005 at IMAX theatres and giant screen cinemas worldwide. A 27-foot (8.2 m) tall bronze murti of Neelkanth Varni is located outside the theatre. 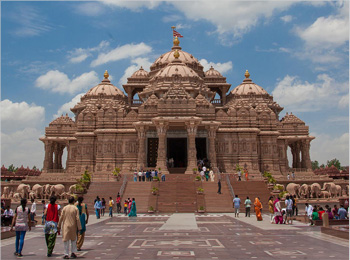 Also known as the Bharat Upavan, this garden has lush manicured lawns, trees, and shrubs. The garden is lined with bronze sculptures of contributors to India's culture and history. These sculptures include children, women, national figures, freedom fighters, and warriors of India, including notable figures such as Mahatma Gandhi. A sunken garden, shaped like a lotus when viewed from above, features large stones engraved with quotes from world luminaries ranging from Shakespeare and Martin Luther King to Swami Vivekananda and Swaminarayan. Devotees offer abhishek, a ritual of pouring water on to the murti of Nilkanth Varni, and express their reverence and prayers for spiritual upliftment and fulfilment of wishes. The Narayan Sarovar is a lake that surrounds the main monument. The lake contains holy waters from 151 rivers and lakes that are believed to have been sanctified by Swaminarayan, including Mansarovar. Surrounding the Narayan Sarovar are 108 gaumukhs, symbolising Janmangal Namavali or the 108 names for god, from which holy water issues forth. The Premati Ahargruh or the Premvati Food Court is a vegetarian restaurant modelled on the Ajanta and Ellora caves in Maharashtra, India and an Ayurvedic bazaar. The restaurant caters a variety of traditional dishes.