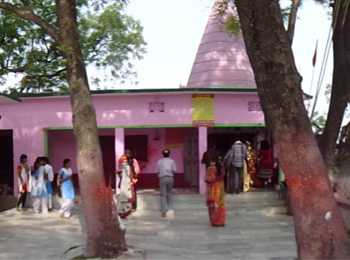 In rural Marhowrah, in Saran district of Bihar, is a temple dedicated to the Goddess Durga or Shakti. This temple is known as Gadh Devi Maa. Legend has it that Durga rested here on her journey to Thawe (in Gopalgunj). The main deity is Devi Maa Durga. Mondays and Fridays are the days when special Pujas are held and the temple sees a lot of crowd on these days. In Hindi, the word Gadh means mountain and hence the Devi is also known as the mountains daughter. Here, the Goddess is worshipped in all her 3 forms - Mahalakshmi, Maha Saraswati and Mahakaali. Besides the main Goddess, there are shrines for other Gods and Goddesses too. 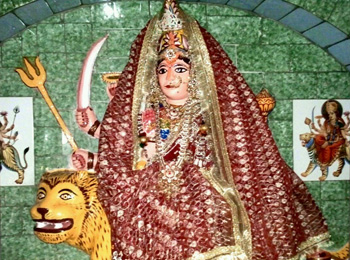 Once, Lord Shiva was bringing upon the destruction of the Earth, holding Sati's burning body. To avoid this destruction, Lord Vishnu cut up Sati's body into pieces. Wherever these pieces fell, a Shakti Peeth emerged. This is the place where some of Sati's blood was splattered. Another story is of the Sugar mill that was in Marhowrah. While the Sugar mill was being built, one after another, there were numerous problems in its construction. Then the engineers and workers worshiped the Goddess continuously for several days. The temple was built after this Puja without any hassle.

Durga Puja is the biggest festival that is celebrated here. There are special Pujas held for resolving marital problems, childbirth issues and other wish fulfillment cases. During Navratri, it is believed that no devotee leaves the temple empty handed. The Goddess fulfills every wish.

The nearest airport is in Patna. The nearest railway station is Marhowrah Junction. This place is well connected to Patna by railways and roadways.