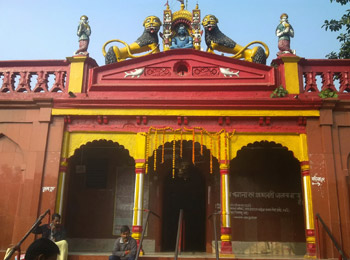 The deity of Goddess Shakti is worshipped at the Maa Ambika Sthan Temple which is located at a village called Aami in Dighwara, Bihar. The temple is situated in the Saran District, almost 37kms away from Chhapra and about 4kms away from Dighwara. This temple is also known as Aambika Bhawani Mandir by its devotees.

The structure of the temple is built of the banks of Ganga River and is surrounded by water from all the sides. The Ganga’s image from this pint is referred to as Lingvat. It is believed that even during the various floods that took place in the area, the fort remained intact. This temple is built on debris. In 1973, Sri Prakash Chandra, the Director of Department of Archaeology of the Government of Bihar found a wall built of bricks that were used during the ancient Pal Dynasty.

This temple is also said to be the place where the Yagya for three years was performed by King Surath and Samadhi Vaishya. After the prayers, Goddess appeared in front of them. Another belief explains that this region was initially called Drigdwara instead of Digwara as it was the main entrance of the palace of Daksh Prajapati. This palace was afterwards destroyed due to Goddess Sati’s corpse but this place has always been of great significance.

As per the legends from Shiva Puran, once the son of Brahma called King Prajapati Daksh criticized God Shiva in front of Goddess Sati due to which Goddess Sati sacrificed her life. She did so as she felt insulted by the words said to her husband-God Shiva. When God Shiva came to know about her death, he carried her corpse on the shoulders and started a Tandava. During this, the ‘Ami’, i.e. the trunk of Sati’s body fell in this region and the holy temple of Shaktipeeth Ambika Sthan was established. It is believed that this is the highest Shiva Tandava Dance stage in the world.

The festivals of Navratri and Shivaratri are celebrated with great joy at the temple. A fair is organised in the village during Navratri while a grand wedding ceremony for God Shiva and Goddess Parvati is conducted on Shivaratri.

Devotees believe that all their wishes are fulfilled by the Goddess if they worship with a pure heart. Thousands of devotees and pilgrims visit this temple during the festival of Dussehra to get the Gods blessings.

How to Reach Aami Mandir

The Jaiprakash Narayan Airport located at Patna is nearest to the temple as it is only 57kms away.

The Dighwara Railway Station is nearest to the temple as it is only 3kms away.

Frequent road transport is available to reach the temple. The village is located on the National Highway 19 and is well connected to other major cities.