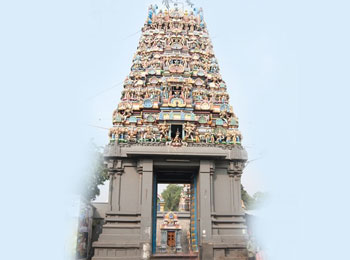 Gangadeeswarar temple, Purasawalkam. Crowded Purasawalkam has an ancient Chola temple for Siva right in its centre, whose tall, five-tiered gopuram is visible from the main road. It is dedicated to Gangadeeswara, the form of Siva who received the River Ganga on her torrential descent from the heavens.

The smaller prakara (corridor) surrounding the shrines of Gangadeeswarar, Somaskanda and Pankajambal have various idols and small shrines. The idols of Surya and Chandra are found facing the shrine of Gangadeeswara. The idols of Nalvar, Nagaraj, Bhageerat, Kasi Viswanath, Veerabhadra, Sekkizhar, Kulachirai Nayanar, Surya, Shanmuga, Durga, Bhairav, Dakshinamurthy and another Bhariav are located in the small prakara. The small shrines of Maha Ganapati, Subramanya with his consorts Valli and Devasena, Natraj utsav (bronze) idol with Sivakami, Uchishta Ganapati with Siddhi and Shiv Linga with Manonmani. The wall surrounding the main shrine has the images of Ganesha, Dakshinamurthy, Vishnu, Brahma, Durga and Chandikeswara.

The temple also has another entrance, Bali peeth and flag staff opposite to the shrine of Pankajambal. The big prakara has the shrine where the bronze idols of 63 Nayanmars are placed. The walls have paintings depicting the stories of Lord Shiva. These are not old paintings. They are very recent time additions. There is a tree where Shiv Linga named Kurunda Malleswarar and Nandi are found. It is believed that the great devotee Manikavasagar preached under this tree. A new attraction is the giant idol of Lord Shiva along with Shiv Linga and Bhagirath. Another surprise for the devotees is a rare shrine of Satyanarayana in this temple. Bana Linga shrine, Navagraha shrine and Ramalinga Adiglar idol are also found in the big prakara. You can also enter the temple tank (very big tank) through the big prakara.

Daily poojas are conducted for four time in this famous temple.

How to Reach Chennai