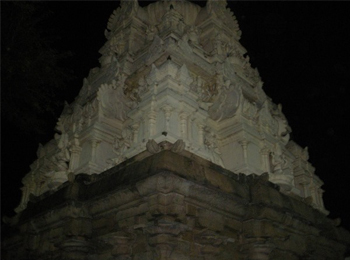 Bangaru Kamatchi Temple is located in the West Main Street, which is called a Mela Masi Veethi in Tamil language, is a well-known locality for the citizens of Tanjore. The word "Bangaru' in Telugu language means "gold". As the idol of the Goddess Kamatchi in this temple is made of gold, the temple is named as 'Bangaru Kamatchi' temple. This temple is located in the heart of the city, where the image of the goddess Kamatchi is in pure gold. The idol is said to have been originally brought from Kancheepuram during the Muslim invasion of the city.

This temple is simple in design and is facing towards the north direction. It has small tower. At the entrance of the temple, there is a big stone idol of Ganesha called as 'Varada Maha Ganapati'.

The sanctum sanctorum enshrines the golden idol of Kamatchi found in the standing posture and holding a parrot in her right arm. Her face alone looks black in colour. Near the main shrine, there is another shrine facing east dedicated to Kamakoti Amman. The temple has just one prakara (circumambulatory passage).

This temple is administered by the Shankaracharya Mutt of Kanchipuram. In the 18th century, there were conflicts between many independent rulers and also the British and the French as the Carnatic Wars. Kanchipuram was also affected due to these conflicts. The continuous political instability leads the head of Kanchi mutt, Sri Chandrasekharendra Saraswati Swamigal V, to shift the base of his mutt from Kanchi to some other place. He was invited by Pratap Singh, the King of Tanjore. Swami shifted his base to Tanjore.

The presiding deity is a golden idol in standing posture. The Bangaru Kamatchi idol in Tanjore was originally in the Kamatchi temple at Kanchi. The idol of Goddess Sri Kamatchi made of solid gold was shifted from Kanchipuram to protect it from the Mughal invasion. Due to the invasion of Kanchi by hostile powers, Shankaracharya Shri Chandrashekarar Saraswathy IV of the Kanchi Kamakoti Peetam shifted the idol to Udayarpalayam and later to Tanjore.

Panguni Uthiram, Navarathri, Thiru Karthikai, Masi Makam, Vaikasi Visakam and Adi Pooram are the festivals celebrated in this temple with much fanfare.

The Nearest Airport is at Trichy.

The Nearest Railway Station is at Tanjore.

The temple is located 1 km behind the Tanjore big temple.