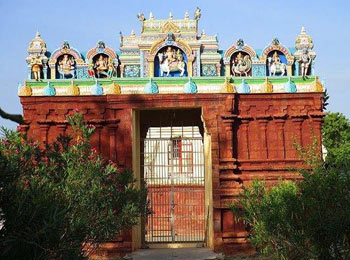 The Vadatali temple is a Hindu shrine dedicated to Lord Shiva and Goddess Parvathi who graces here as Lord Dharmapureeswarar & Devi Vimalanayaki. Patteshwaram is a village located very near to the renowned ancient city of Pazhayarai, which houses the grand Somanathar temple. This temple now stands ruined. Vadatali is also known as Vallalar Kovil. Located south of River Cauvery, Patteeswaram holds the 24th place in the series of Tevara Stalams pertaining to the Chola kingdom. Several historically significant temples are located at the vicinity of Pazhayarai, namely Patteeswaram, Darasuram, and Satthi Mutham. These temples houses numerous inscriptions and ancient structures which are of historic importance. Pazhayarai was once of capitals of the Cholas in the olden times. Despite establishing Thanjavur as their capital city, the Cholas kings still considered he place significant. Emperor Raja Raja Chola I is believed to have been raised in Pazhayarai. According to Hindu Mythology, Chandra Deva is said to have worshipped Lord Shiva at Pazhayarai. Sundarar, who is one among the prominent Nayanmars, have sung hymns in praise of the Metrali temple.

This temple located at a distance of mere 100 meters from the famous Parasunathar Temple (Then Thali) temple at Muzhaiyur. It I considered the 141st Devaram paadal Petra Shiva Sthalam. The much revered Nayanmar Appar, has sung many hymns in praise of Lord Shiva at this temple.

This is a Maadakovil built at an elevation by Ko Chenganan Cholan. Pazhayarai was one of the ancient capitals of the Cholas. The place lost its glory during the early Chola period, but got back its prominence in the later Chola rule pertaining to the 12th and the 13th century AD. This is mainly attributed to the development of the areas between the Kaveri river and the Tirumalairajan channel, which is known as the cradle of Tamil culture. A number of temples were constructed in this stretch, thereby giving rise to many religious literatures. The temples of Darasuram, Tribhuvanam, Sattimuttam, Patteeswaram and Kumbhakonam are situated very close to this temple.

Pazhayarai Vadathali is in Muzhayur, now known as Dharmapureeswarar Temple. The temple is an elevated shrine built by Ko Chenganan Chozhan. Facing the direction east, the temple was in a dilapidated state and has been completely renovated fully in the recent times. Saint Appar is believed to have sung Thevaram Hymn on this deity. The Nayanmsr is said to have observed a strict fast, praying the Lord to free the temple from the clutches of Jains, who had kept it closed.

The town is surrounded by lush green fields, with rivers like Mudikondan and Arisilaaru running close to it. The entire area is rich with many archeological remains which are of historical significance. There are also other Shiva shines in Keezhttali and Metrali near Pazhayarai. There are a number of intricately carved structures which are in a dilapidated state now. Notable ones include the image depicting the fight between a lion and a warrior, the slaying of Hiranyakasipu and the lifting of the Kailasa Parvatam by Ravana.

Karthigai, Somavaram, Sivarathri, Chitrai, Rohini are the festivals celebrated in this Temple.

How to Reach Trichy

The Trichy airport is the closest airport to this place. Pazhayarai can be reached from Muzhayur on the Kumbakonam-Aavur route.

The Darasuram railway station is located close to the temple.