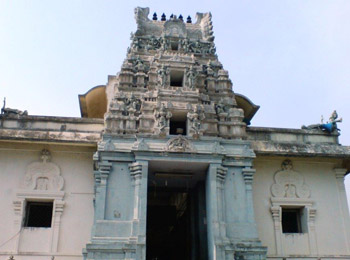 This temple is situated in between the hill temples, Tiruneermalai and Tirisoolam. At the bottom of the hill are the sanctum of Siddhi Vinayagar, and Itumpan. The Kaali here is called ‘Jeyamangalathanma Kaali’ because she remains peaceful and bestows victory and good welfare. Special pooja is performed to her on the Full Moon Day. On the Kanda Sashti day, Lord Muruga goes in procession on the elephant-carrier, after performing Soora Samhaaram (annihilation of the demon Soora). Nataraja with right leg lifted: Sundareswarar temple is situated on the way to the hill temple. Here Lord Siva appears under the ‘Ghajabrushta Vimaanam’ in the north-facing sanctum. The entire image of Lord Siva is chiseled on the linga. There is a sanctum to Goddess Meenakshi also. Lord Nataraja here is in dancing posture with his left foot firmly fixed and right foot lifted. He is installed so because it is the sanctum of Meenakshi-Sundareswarar. The right foot of Lord Siva is considered to be Siva’s in the ‘Siva-Sakthi’ united aspect. So, Lord Nataraja here is known as ‘Than Paadam Thookiya Natarajar’ meaning ‘Natarajar who lifted his own leg’

Long ago, there was only a hillock in this sacred place. Once, Kanchi Periyavar who came to this place saw this hillock and said that in the later years, a Murugan temple will come into existence here. After some time, when a few devotees tried to put in order this hillock, they found a ‘Vel’ – Spear in the hill. They installed it in this place and started worshipping it. Later on, a separate temple for Lord Muruga was built. He was also named ‘Swaminathan’

Devotees pray to this Lord to ward off the hurdles to get married and beget issues. Since Lord Muruga faces the northern side, devotees offer Him sacred things to augment opulence in the family. Thus, he is called Aishwarya Mugham.

Abhishekam is performed to Murugan, Lord Siva and Ambal and donned with new clothes. Devotees make an offering this way.

The nearest airport is in Chennai, in Meenambakkam.The nearest railway station is in Chromepet. It is also well connected by road.