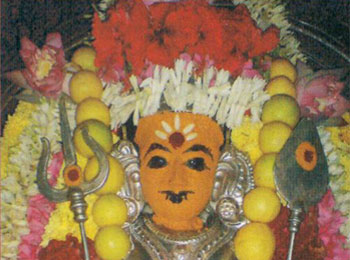 The Arulmigu Vadukanathaswamy Temple is located in Kundadam and is dedicated to God Vadukanathaswamy. This region was earlier called the Hindu forest where Saint Vidangar was praying to God Kasi Viswanathar. The God sent Vaduga Bairavar to safeguard the saint. It is said to that there is a sand pillar depicting the saint and Vaduga Bairavar. Another story associated with the temple involves Vaaniga Chettiars who were trading pepper with the Pandyas and the Cheras. When the trader crossed the Hindu forest, Vaduga Bairavar turned into an old brahmin and requested the trader to give him pepper for his cough. The unwilling trader told the Brahmin that he was carrying green gram. When the trader reached the market, the pepper turned into green gram. The king declared penalty for the trader. At that moment, God Vaduganathar said that He had changed the pepper. The king asked the God to cure his children of speech impairment and disability if that was true. The God asked the king to go to the Hindu forest and pray to the sand pillar. The king did so and established a temple there for Bairavar, Vidangeswarar, Goddess Visalakshi and Somaskandar. The trader also contributed his wealth to the God. When he entered the temple, he wasn't able to return, only his voice was heard from within the temple. It was said that he had attained moksha.