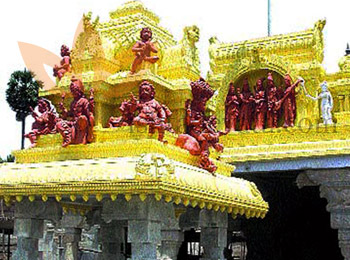 As Mother performed penance facing west, Lord Shiva too graces in the temple facing west. On His left, Mother graces with lotus flowers in hands and a crown facing west. The brass frame around Her has a lion at its top. This ancient place was covered by green fields when Mother performed her penance. Green fields in Tamil are called Pazhanam, hence was known as Perum Pazhanam and Perum Pazhana Puri which in course of time changed as Perumanallur.

One Ponnambalakoothan belonging to the Chola region donated this land for renovating the Vinayaka temple here. Remembering him, the place is also known as Koothanur. Sri Sundaramurthy Nayanar and his friend Cheraman Perumal, a staunch Shiva devotee worshipped the Lord here.

As the temple was built by kings Rajaraja Uthama Cholan and Uthama Chola Veeranarayanan, the Lord is named Uthamalingeswarar. Lord Oordhvathandavamurthi, Arthanareeswarar, Veerabagu, Nambirajan with his wife and scenes explaining the importance of Shivarathri is beautifully sculpted in the pillars of the temple.

Once, people began to indulge in sinful and arrogant activities, forgetting God totally. The righteous shrunk while the wicked grew in numbers. Furious Shiva caused sand rain threatening total destruction of earth. Some Shiva devotees prayed to Mother Parvathi to pardon the sinners and turn them good. Mother Parvathi pleaded with Lord Shiva for them which He turned down. To help the people, Mother came down to earth and began a severe penance on Lord Shiva sitting westward under a Vilwa tree in Perumpazhanam. Lord Shiva appeared before Mother Parvathi and granted Her wish. Mother Parvathi stayed in the place in the name of Govardanambikai with Lord Shiva as Uthamalingeswarar. Later, the temple was built by Chola kings.

11 day Brahmmotsavam in Chithirai (April-May),Aani Tirumanjanam in June-July, Sani Peyarchi – transition of planet Saturn once in two and half years, Navarathri in September-October, Shivarathri in February-March and Tirukarthikai in November-December are the festivals celebrated in the temple.

People pray for child boon, progress in education and for removal of obstacles in marriage talks.

The nearest airport is at Coimbatore Airport.

The nearest railway station is at Tirupur Railway Station.

Perumanallur is 15 km from Tirupur on the Tirupur-Erode bus route running through Gopichettipalayam. The place can also be reached through bus Nos. 10, 26, 54, 26, 43 from Tirupur terminating at Kunnathur, Kanakkampalayam and Nambiyur.