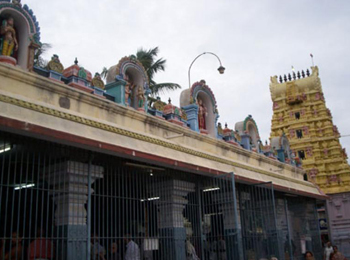 The deity is known to the devotees as Jalakandeshwarar as it remained underwater since a long time. The idol was afterwards renamed and called Arthnareeswara, referring to a being demonstrating both female form and male form at the same time. The devotees accept the notion of worshipping both the Goddess and God Shiva together in this temple.

The temple is constructed in a way that it faces East direction and comprises of a Nandi Mandap, Bali Peera and a Maha Mandap. A Shivalinga with a radius of 3.5 feet is enshrined on a platform in the temple. Arthanareeswara is among the several forms of God Shiva which belongs to the Satyojatham facing West direction. The deity of Goddess Tripura Sundari is installed in the next shrine facing South direction. The deity of God Navgraha and God Sri Ashtabuja Durga are also enshrined in the temple. The deity of God Sri Ashtabuja Durga is about 8 feet tall.

As per a legend associated with this temple, once an old man was trying to clean the pond or tank located in his land and while doing so, he identified some deities buried in it. He quickly cleaned the deities and decided to keep them in a tent with thatched roof. Initially, the people of the town began worshipping these deities by lighting the lamps but then later built a temple around it.

The Chennai Airport is nearest to the temple

The devotees can arrive at the temple by travelling via local trains or by arriving at nearest Palavanthangal railway station.

Frequent bus services are available for the devotees to reach this temple. The bus stop of Nanganallur is nearest to this temple.

The temple is open every day of the week from 7 o’clock in the morning till 10 o’clock at night.