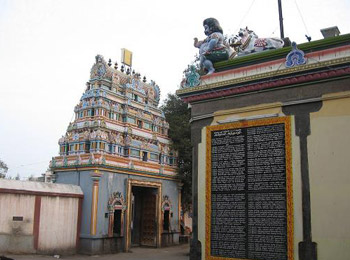 The Agatheeswarar temple is situated in Chennai. It is dedicated to lord Shiva and this is the place where shukra Planet venus worshiped lord Shiva.

The main praharam has the Agastheeshwarar sannidhi facing the east. The base of the sivalingam has constant water percolating like in Thiruvanaikaval. When they tried digging up to 20 feet during the kumbabhishekam they could not go to the base of the lingam and encountered water welling up and this has been led to a well nearby and the priest informed me that this is the source of water for the entire complex and the surrounding area as well. The ambal sannidhi is to the right facing the south. Akhlandeshwari is in standing pose.

Though a Lord Shiva temple, Mother Shukravara Amman is the prominent deity here. Though She has shrines in other Shiva temples, She is taken in procession in this temple only. Planet Venus - Shukra worshipped Lord Shiva to regain his eye sight which he lost to Lord Maha Vishnu during His Vamana Avtar. Mother Parvathi too was in penance on Lord at that time. Lord Shiva was just thinking to whom His grace should go first. Mother Parvathi was gracious to ask the Lord to offer His grace to Shukra first. She told Shukra that the Friday (Shukravar) belonging to him should be transferred in Her favour and that he should not be adverse to Her devotees which Shukra readily agreed. Thus, Mother Anandavalli became to be praised as Shukravara Amman.

King Bommarajan who ruled this place once, got Sula disease (a form of fever where he was burning hot) and prayed to Perumal. Perumal guided him to take bath in the Agastheeswarar temple tank and worship Shiva here. He did the same and got his disease cured. Goddess Akilandeswari has a separate shrine here next only to Thiruvanaikkaval. At one corner of the temple tank is present the Swayambu amman Asalathamman.The amman temple is being rebuilt now.

Purattasi Navarathri in September-October and Maha Shivrathri in February-March are the festivals celebrated in the temple.

How To Reach Agatheeswarar Temple