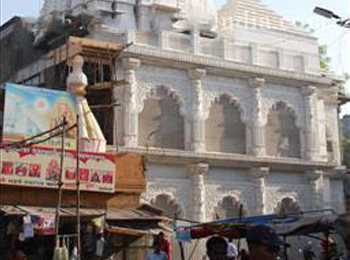 This immensely sacred temple is completely draped in pristine white marble, which also makes it very architecturally beautiful. The temple’s construction in white marble was largely inspired by the famous Birla Temple in Jaipur city. However, unlike famous Birla Temple in Jaipur, Vishal Ganpati Temple isn’t recently constructed temple. The construction of this temple dates back to more than 100 years and for many generations it has been like a spiritual oasis for people of Ahmednagar.

However, this temple’s Lord Ganesha deity clad in red color is so beautiful that it doesn’t require any miracle stories to convey how beautiful and special it is. Besides being naturally beautiful, the idol is also pretty huge and also bears many unique features. It is 3.6m tall and its unique blessing posture and shivalinga coiled by snake originating from navel further adds to the aura of this deity. It is suffice to say that more than the architectural beauty of the temple and the make-believe miracle story, it is the sheer beauty of Lord Ganesha deity that has been and even today continues to draw thousands of devotees’ every day.

Every year during Ganesh Chaturthi festival this temple, needless to say, really comes alive with beautiful decorations and thousands of visiting devotees. In fact on the first day of Ganesh Chaturthi the entire precinct of this temple turns into a devotional carnival, as thousands of Ganesha bhakts from far across Ahmednagar district come here on the auspicious day for Lord Ganesha’s darshan.

How To Reach Ahmednagar

One can easily get regular trains to Ahmednagar from other major cities of the country.

There are regular buses from other major cities of the country to Ahmednagar.