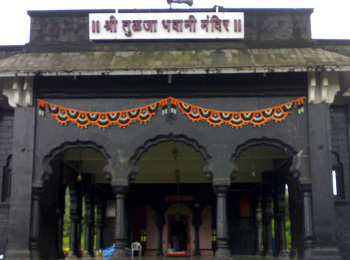 Burhannagar Devi Temple was constructed by Bhikaji Bhagat in 1913 on the left half of Kapurwadi Lake. In Navaratri on the third day there is yatra. The Devi's seat is conveyed to Tulajapur consistently in navaratri. This pradikshana is begun by Sant Jankoji.

Presently a few changes have occurred before section entryway of Mandir there was a spot where oil was evacuated with the help a bull and wooden oil expeller. A delightful lion statue is set in Sabha mandap from where we enter to take darshan into the sanctum sanatorium (gabhara) of Jangadamba Mata. The statue is of dark rock stone (gandaki sheela).

Tulja Bhavani temple is located near Ahmednagar city about 5 km. Ahmednagar is well connected by roads with various major cities of Maharashtra and other states.