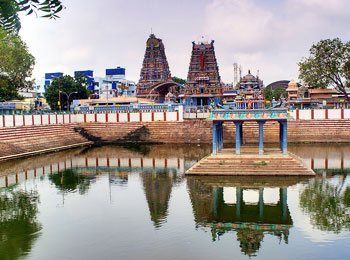 Vadapalani Murugan Temple is a Hindu temple that is devoted to Lord Muruga. It is situated in Vadapalani, Chennai. The main deity is Vadapalani Andavar.

The Vast courtyard and Rajagopuram where built during the renovation of the temple in 1920s. The Gopuram has images that depict the Scenes from Skanda puranam. In front of the temple is the temple tank. The eastern tower is 40.8 metres tall. The 108 bharata natyam dance gestures can be seen on the eastern tower. It has a spacious hall used for marriages and religious discourse. There is a golden car (rath) for the temple. The holy tree of this temple is Athi tree.

The moolavar is in the standing posture resembling the Palani Muruga. Lord Muruga graces with His Padukas-chappals. As Lord Muruga is the deity for planet Mars, there is a special shrine for the planet in the temple. The inner prakara, has shrines for Dakshina Murti, Chandikeswar, Mahalakshmi, and others. There are other shrines including Varasiddhi Vinayaka, Chokkanathar, Meenakshi Amman, Kali, Bhairava, Shanmuga with Valli and Devasena.

According to the sthalapurana, Muruga devotee Annaswami Nayakar built the shed and kept a Murugan painting there for his personal worship. During his worship, he experienced divine power entering his body and inspiring him to speak surprising things later found to be true. His utterances were labeled 'arul vakku' ('God blessed statements') and could cure diseases, provide jobs, solemnize marriages and more.