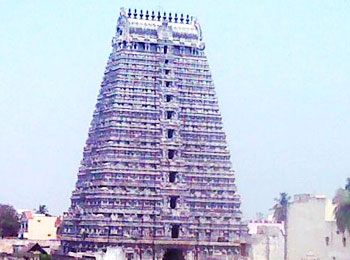 This temple is said to be built by the Pallavas and was later contributed mostly by the Chola dynasties, Vijayanagar Kings and Madurai Nayakars. Ulagalantha Perumal Temple is built in a Dravidian style of structure and has a three-tiered Rajagopuram (temple tower) with seven Kalasams (a pot like structure), one of the prominent symbol of Hindu temples. The legend says that the authority of Lord Indra, the lord of heaven was taken by the demon King Mahabali. The demon king Mahabali with his severe penance won the praise of the world and he considered himself as the all-powerful in the whole world and heaven. And it is said that Lord Vishnu took Vamana Avatar (the fifth incarnation of Lord Vishnu), to restore the authority of Lord Indra. In Vamana avatar, Lord Vishnu is called as ‘Thrivikraman‘.

The presiding deity of this temple is Lord Ulagalantha Perumal also called as Thrivikraman stands at a height of 35 feet with his right leg at a right angle to the body and parallel to the ground, placed on the head of the demon King Mahabali. The two left hand fingers of Lord is seen stretched out, which indicates that he took two steps to measure the world. And one finger of His right hand refers to the question that Lord posted to the demon king, where he could place His third step.The Goddess of this temple is ‘Amudhavalli Thayaar‘ (Goddess Lakshmi) and the festival deity of this temple is Lord Loganathan.

In his Mangalasasanam, Tirumangai Azhwar had specifically mentioned the name of the Lord of this temple as Karvaanathu Ullai Kalva – “you are in Karvaanam stealing the hearts of the devotees.” Hence, this temple assumes greater significance than the other two. Historians are unable to conclude whether Tiru Neeragam and Tirukarakam had come to join Tiru Ooragam when Azhwar came here to submit his Mangalasasanam. Or did Azhwar sung his hymns at different places. When the temples met together, are questions still not solved.

Vaikunda Ekadasi in Tamil Margazhi covering December-January is grandly celebrated in the temple.

Chennai houses the nearest international airport, and is situated around 75 km away from Kanchipuram. Both public and private transport facilities are available at the airport. Kanchipuram is connected with the southern part of the rail network and few trains are running through Kanchipuram. Suburban trains are running between Kanchipuram and Chennai beach on specified intervals. The city of Kanchipuram is well connected with the other part of the states and it is few kms from the Quadrilateral National Highway. There are frequent bus services from Chennai and it takes 2- 3 hours to reach. The Chennai Metropolitan and the state express transport operate the services.