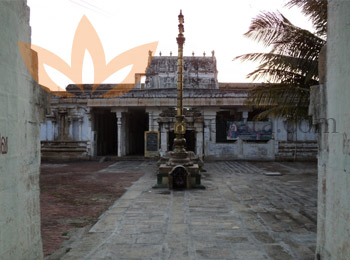 Sakthivanesvara Temple is dedicated to the Hindu god Shiva, located in a small village called Thirusakthimutram, near another small (but relatively better-known) village, Patteeswaram. The nearest urban center, about seven kilometres (four-and-a-half miles) away, is Kumbakonam, Thanjavur District, Tamilnadu.

Here the presiding deity Sakthivanesvara is a form of the Hindu god Shiva, in which his usual worship symbol the Lingam is hugged by his consort Parvati, hence he is also known as Sivakozhundeesvara and Sakthi Mutham.

It is believed that when one prays to Sakthivanesvara with faith, one is blessed with the life partner of one's choice. This temple is the 22nd in the series of Tevara Stalams located south of the river Kaveri. 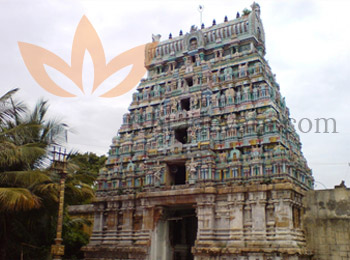 This is the 22nd sthalam on the southern side of river Cauvery. It is considered as one of 275 Paadal Petral Stalams.This temple has two prakarams and occupies an area of less than an acre. A majestic five tiered Rajagopuram crowns the entrance. An image of Shiva and Parvati in embrace is enshrined in the temple. The Natarajar shrine and the Sarabeswarar shrine are important here. Appar prayed to surrender at the feet of Shiva, which was granted at Tirunallur nearby.

There is a separate shrine for Periyanayaki Amman, Siva kozhundeeswarar in sanctum. At the entrance of the Sanctum there is a statue of Shiva and Parvati in embraced posture is famous. The Natarajar shrine and the Sarabeswarar shrine are important here. 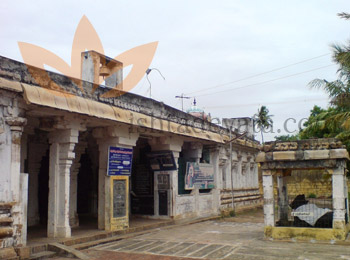 Mother Parvathi (Shakti) worshipped Lord Shiva here, embraced and kissed Him, hence the place is named Tiruchathi (Shakti) Mutham (kissing) – Tiruchathimuttram. This form of Mother embracing the Lord still exists in the temple. This form of Ambika is depicted at the northern side near the sanctum sanctorum. Mother performing penance standing on a single leg, is also depicted behind this sculpture.

It is said that this a replica of Mother Kamakshi embracing Lord in Kancheepuram. Mother Parvathi, Sage Agasthya, Saints Gnanasambandar, Tirunavukkarasar, Arunagiri Nathar and Ramalinga Adigal had worshiped Lord in this temple. Lord granted the Tiruvadi darshan (darshan of the feet of Lord) to Saint Tirunavukkarasar in this place. Special pujas are performed in the temple on full moon and new moon days.

This temple was reconstructed by stone during the period of Sembiyan Madevi and the early years of Raja Raja Chola I (1000 CE). Inscriptions from the period of Raja Raja Chola II (1166-1182 CE), Kulottunga Chola III, and the Vijayanagar Emperors are found here. This place is near to Patteeswaram temple, nowadays the sakthimutram temple is known as Chinna Kovil which is popular in local.

Sri Sakthi embraced Lord Shiva and gave kiss. Idol is in front of Moolavar Sannadhi. Archana is performed only to this Shivasakthi moortham and Only aarathy is shown to Moolavar. It is believed that when one prays to Sakthivanesvara with faith, one is blessed with the life partner of one's choice. Pujas on Monday by married couple will bring joy in their life and the separated husband and wife will rejoin in their family life by doing temple cleanliness, milk anointing and Vastharam to the Lord.

The Nearest Airport is located at Trichy.

The Nearest Railway Station is located at Kumbakonam & Darasuram.