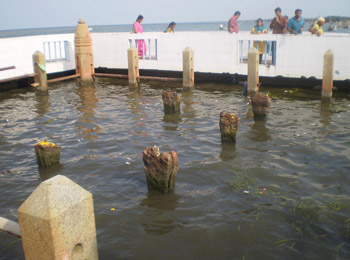 The Devapattinam Temple is located about 70 kilometers away from Rameswaram, and is dedicated to God Shiva and Goddess Parvathy. Before undertaking the journey to free Sita from Lanka, God Rama was said to have performed Vinayaka Pooja in Uppur and the Navagraha Pooja in Devipattinam. He installed each of them with a handful of sand and calmed the tides with a wave of his hand. 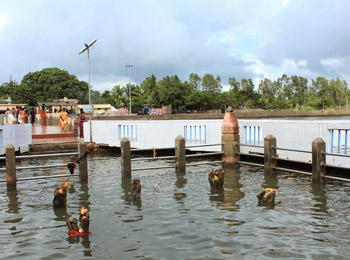 These Navagrahas installed by God Rama are the Nava Bashanas in this temple. The temple is also called Navabashanam. It is located at a coastal Village that lies 70 kilometers away from Rameswaram. This temple is dedicated to God Shiva and Goddess Parvathi. God Shiva here is known as Thilakeswarar and the Goddess is known as Soundaryanayaki. The shrine has a beautiful image of Goddess Durga with eight-arms holding weapons in each. It has a small temple inside which is dedicated to the goddess ( Ulaganayaki Amman), who is said to have killed the demon Mahishasura at this very spot. Devipattinam is the only place in the world where Navagrahas (nine-planets) are located inside the sea. Most of the original statues of nine planets have got battered and are not recognizable as any particular planet. Devotees at the temple offer nine varieties of grains including paddy, wheat, pulses and other things to the Gods and Goddesses. About hundred yards inside the sea lies nine withered blocks of stone, supposed to be the Navagrahas. These stones can still be watched partly submerged in the water near the bathing place of Navagraha Temple. The Hindus perform religious rites for their forefathers in this temple. People come here to perform Tarpan for their ancestors. 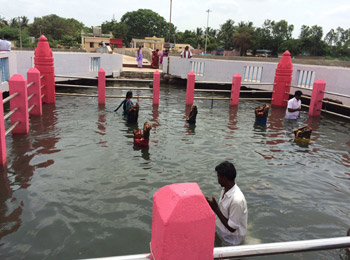 The specialty of this temple is that the 9 deities of the Navagrahas are installed in the sea near to the shore in the village. 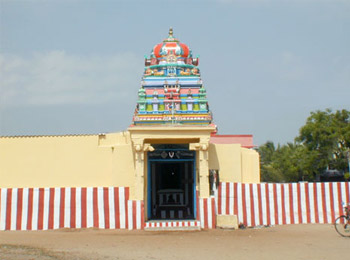 It is believed that the stone idols of the Navagrahas were installed by Lord Sri Rama to appease the Graha devathas (planetary deities) by fixing 9 stones (rock pieces) a few meters into the water of the sea near to the shore before he went  to Lanka to wage war against the demon king Ravana in order to rescue his wife Sitha from the demon king. After installing the deities Sri Rama worshiped the Navagrahas installed by him along with Lord Siva for removal of the troubles from his life. It was not much known earlier may be due to the deficient conveyance facility and infrastructure facilities of the place as it is a very small village on the coastal area in Devipattinam. 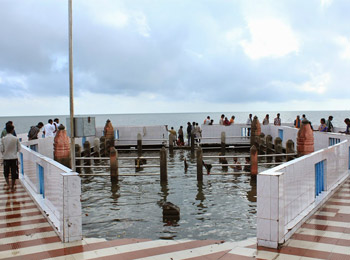 In the month of Avani (August-September) all Sundays are celebrated as festival days. Devotees can be seen visiting the temple in huge numbers during these festivals. Adi Amavasya festival is observed for 10 days in the Thai month (January-February) and draws people from around the country to participate in it. Devotees visit the temple almost every Sunday, especially on the Aslesha Star (Ayilyam) days.

According to astrology, the life of a human depends upon the conducted and positions of nine planets. The outcomes of these placements are subjected to rejoicing or sufferings based on their deeds in the previous birth. Therefore, devotees come here to worship these planets and get relief from their sufferings. Devotees offer nine varieties of grains, wheat, pulses, ellu etc. They take a round of the deities and perform Navagrahas puja i.e worshipping the nine planets.

It is about 15 kms from Ramanathapuram and buses going to Karaikudi stop at Devipattinam. The shore is walkable from the bus stop.