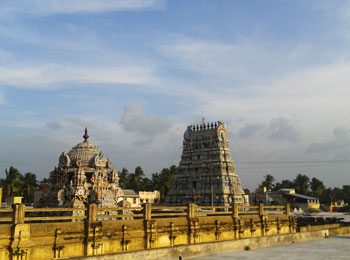 
Kannur district derived its name from the location of its headquarters at Kannur town. Kannur was formerly known as Cannanore. Kannur is popularly known as the city of Looms and Lores. Kannur is the land of the famous performing art Theyyam.


Apart from the main deity, Subrahmanya, there are other deities also being worshipped here. They are Lord Ganapathi, Bhootathar, Kanya Bhagavathi, Sasthavu and Parasurama.


Later it was destroyed two times one because of fire and other because of the attack of 'Tippu Sulthan'. Then it was re constructed in 1792AD. The two storied sreekovil (sanctum sanctorum) is in the shape of “Gajaprishta” (back of an elephant). This temple is known as the 'Palani' of Kerala, 6 ft tall idol of the main deity Lord Subrahmanya There are five 'poojas' and three 'Siveli's on each day. There are many unique features about this temple in the rituals performed, the architecture etc. First of all the 12ft tall compound wall constructed in a unique style is very rare kind in the temple architecture of Kara. The total area of this temple compound is above 3 acres. . Kshetrapalan and Vairajathan are also being worshipped. Both in rites and customs, this temple is unique. As the height of the idol is 1.8 metres, the priest has to stand and perform the puja to the idol. The main festivals of the temple do not have the usual pomp with caparisoned elephants, fireworks and the like. Instead, the thitamb of the deity is always taken in procession on the head of the priest both for the daily. Sree bali and on festive occasions which may sometimes take even 4 hours. Being a Subramaniya temple, the temple is associated with astrology. By the benevolence of the diety, many persons in the past have achieved great reputation and there are still many adorning high positions. Another unique feature og the temple is the Pavithra modhiram made here. This is a golden ring of a peculiar pattern worn in the ring finger of the right hand by the Acharyas before commencing important temple rites. The pavithra made here is made up of 101 panavitas (5.05 g). After making the ring, special pujas are performed in the temple. The main deity is that of Lord Subramaniya, an idol which is 180cm tall over the peetham, in standing posture with two arms, the right hand holding the Vel and the left hand resting the hip (Kati Bandha). The sub deities are that of Lord Parashuraama, Sree Boothathaan, Maha Ganapathi and Dharma Shaastha.


It is approached with prayers for protection, wisdom, energy, forgiveness for past deeds, to neutralize the malefic effects of Mars, for good health and to become courageous.


There are no regular flights from other major cities of the country to Kannur. Nearest airport is Calicut International Airport.


Kannur is well connected to other major cities of the country via regular trains.

The nearest rail head is at kannur


You can easily get regular buses to Kannur from other major cities of the country.