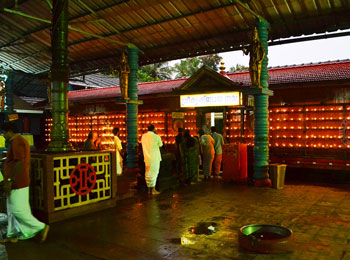 The Kadalayi Sreekrishna Temple is situated in Chirakkal, Kerala and is dedicated to Lord Vishnu. It is believed that the idol of Lord Vishnu consecrated here is the very idol worshiped by Sathyabhama, the consort of Lord Krishna at Dwaraka in the Mahabharata Era more than 5,000 years ago.

Kadalayi Sreekrishna Temple, renowned as ‘The Guruvayoor of Notrh Kerala’ attracts hundreds of devotees from far and near. The temple, famous for its antiquity and holiness, is situated at Chirakkal, a village 6 k.ms north of Kannur in Kannur District, Kerala. Legend has it that the idol consecrated here is the very idol worshipped at Dwaraka by Sathyabhama, Lord Krishna’s Consort. Centuries after, the Kolathiri King ruling over Kannur and neighbouring areas was divinely blessed with the possession of the self-same idol. He built a temple at Kadalayi, a village about 6 kms south of Kannur and consecrated the idol. With the passage of time, the temple became dilapidated. A new temple was later built at Chirakkal and the idol re-concecrated. This is the myth regarding the origin of this famous temple. A Swarna Prasnam was conducted at the temple in 2005 under the auspices of the Naveekarana Kalasa Committee constituted as per the orders of the Commissioner, H.R. & C.E. Department. The astrologers advised the performance of Naveekarana Kalasam and many other rectification/purification steps including the protection of the idol by a Panchaloha covering (Panchaloha golaka). The Panchaloha covering of the idol and Naveekarana Kalasam are scheduled to be conducted from 9th to 21st February 2008 (26th Makaram to 8th Kumbham 1183). This venture calls for a huge financial outlay. The committee expects liberal donations from devotees to this noble spiritual cause and hopes that with their unstinted support and the benevolent blessings of Lord Krishna, the task can be brought to fruition, thereby reviving the ancient glory of the temple and bringing peace and prosperity to all devotees.

There is an interesting legend associated with the origin of the temple. It is believed that the idol of Lord Vishnu consecrated here is the very idol worshiped by Sathyabhama, the consort of Lord Krishna at Dwaraka in the Mahabharata Era more than 5,000 years ago. One day it so happened that she failed to notice her husband standing nearby as she was immersed in performing Pooja to the idol. The Lord, furious, kicked the idol off the pedestal. It flew into the nearby sea, when its right hand was broken. Time and tide took the idol to the Kannur sea belt off Dwarka. A fisherman happened to net it. It being a precious catch, he presented it to King Valabhan, the Kolathiri King ruling over the area in that period. The king had constructed a temple, Kadalayi, in a village about 6 km (3.7 mi) north of Kannur and was on the lookout for an idol to be consecrated there. The astrologers understood the sanctity of the idol and confirmed that the idol, though its hand was broken and thus deformed, was worthy of consecration. The idol was thus consecrated at Kadalayi. When the temple was ruined due to the devastating onslaught of time a new temple was built at Chirakkal 180 years ago and the old idol re-consecrated. The temple, though situated at Chirakkal, is still referred to by its old name, Kadalayi.

The annual festival of the temple is from 15th Makaram to 22nd Makaram. (This falls during the last week of January and the first week of February.) The hosting of the holy flag (Kotiyettam) is on Makaram 15 and holy immersion of the idol (Aratt) which marks the end of the festival is on Makaram 22nd.

The temple is situated 500m away from Puthiyatheru, the busy market place of Chirakkal, which stands on NH 17 about 6 km (3.7 mi) north of Kannur and 18 km (11 mi) south of Taliparamba. Mofussil buses plying between Kannur and Taliparamba pass through this place. There are also frequent town services. The nearest major railway station where all trains stop is Kannur on Kozhikode-Kannur sector of the Southern Railway. You can take a bus/taxi/autorickshaw from there to reach the temple. The nearest airport is Kozhikode Airport.