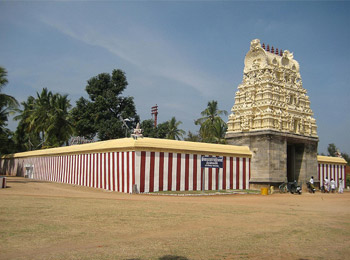 Sri Yoga Ramachandramoorthy temple is 1 km to the west of Arulmigu Renugambal Temple at Padavedu, Tiruvannamalai. It is 1000-2000 years old. This was also buried in sand and was dug out recently. This temple is dedicated to Lord Rama named as Yoga Ramachandra. 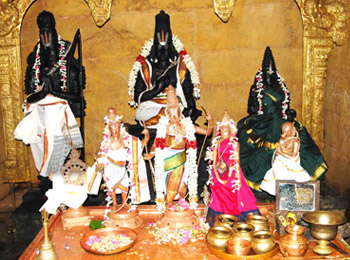 The temple was constructed before 12th Century AD. The idols bear testimony to the influence of Vijayanagara Empire and Sambuvarayar chieftains. Inscriptions on this temple indicate that the temple had been receiving support from Krishna Devaraya and his successors from Vijayanagara Empire. The Anjaneya shrine is outside the temple. There are shrines for Vishwaksenar, Nammalvar, Periyalwar, Alavandar, Sri Ramanuja and Vedanta Desika in the front mandapam. In the corridor-prakara are shrines of Lord Venugopala, Parasurama and Sri Anjaneya. There is a temple for Lord Venugopala in Kottai hills behind this temple. Famous Padavedu Renugambal temple is 3 km from this temple. Sri Rama is an outstanding example of a life with one wife (Ekapathni Vradha) and lived with Mother Sita alone; there is a shrine for Mother Shenbagavalli too. As the Mother taught Sri Anjaneya that she was the Paramatma, she assumes the status of Perumal. There is also a shrine for Mother Vishnu Durga. There is no shrine for Sri Andal. Sage Valmiki’s first verse in Ramayana describes meditation qualities (Yoga practices) of Lord Sri Rama. The temple is constructed translating this philosophy. The thala virutcham of this temple is Shenbaga tree. 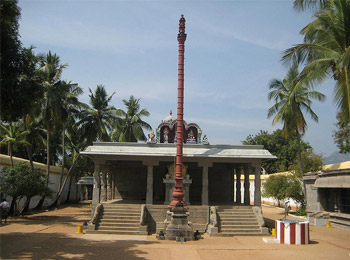 Lord Sri Ramachandra with his consort Mother Sita is seated on the Veerasana throne with his right hand on the chest showing the chinmudra. The idol is sculpted in a single stone with a Peeta-seating. Sri Anjaneya is by the side of the Lord with palm leaves. As the Lord was also a teacher-Acharya to Anjaneya, he holds no weapons. Sri Lakshmana alone standing nearby has a bow and arrows.

Vedas are the basis for the existence and activity of the world. Sri Anjaneya had a doubt what then was the seed of the Vedas. Who was the author of the Vedas? What is the quintessence of Vedas? Sri Anjaneya approached the Lord for enlightenment. Lord kept his right hand on the chest showing the chinmudra silently saying that he is the Paramatma and that he dwells in the biological body of every creature of the world.

After killing Ravana, Lord Rama returned to Ayodhya and was crowned. Once, Lord Rama learned through a sacred voice from heaven about the atrocities of hundred headed Mahi Ravana, an Asura. The sacred voice requested Lord Rama to destroy this Ravana also. On behalf of Lord Rama, his ardent devotee Hanuman with his monkey troops rose against Ravana. The intense battle witnessed the fall of his soldiers on the hands of the Asura. In spite of his best efforts, Hanuman could not locate Ravana. Sita told Hanuman that Ravana was a staunch devotee of Goddess Renuka Devi and his life force was hidden in a lotus flower of a Pond at Kundalipuram and he had been protected by Goddess Renuka Devi. Sita asked Hanuman to go to Kundalipuram and destroy Ravana.

Garudasevai on Aavani Friday in August – September, Masi Magam in February-March, Sri Rama Navami in March-April, and new moon and full moon days are the festivals observed in the temple.

Special Abishekams are performed to Lord on Poornima and new moon days and on Punarvasu star day-the birth star of Lord. Lord Rama with Mother Sita and Sri Lakshmana graces his devotees on Garuda his eagle vehicle (Garuda Seva) on the second Aavani Friday in August -September.

Lord Rama is seated in Veerasana throne under the Pushpaka aircraft showing the Chinmudra (keeping the thumb and the first finger together while other three fingers are left separately) and keeping the right hand on the chest. This is a very design of Lord Vishnu’s appearance. There is no Sorgavasal (gates of Heaven) here as traditionally found in Vishnu temples.

As Lord Sri Rama graces here as a Guru, the temple is more revered as a place of worship seeking academic benefits. They pray for good education, freedom from forgetfulness and wisdom. People also pray for a happy wedding, child boon and unity in family. They light ghee lamps and offer a pulse called pasipayaru and sweet Pongal-pudding as nivedhana to Lord.