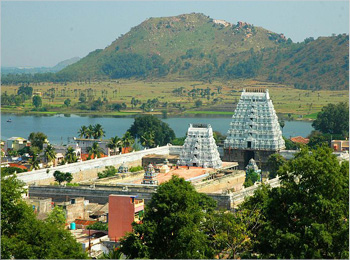 The Periyanayagi Ammam Temple situated in the center of Devikapuram village. This temple is built by the Vijayanagara Emperor in the 14th century. This is the second largest temple after Tiruvannamalai Arunachaleswarar Temple. 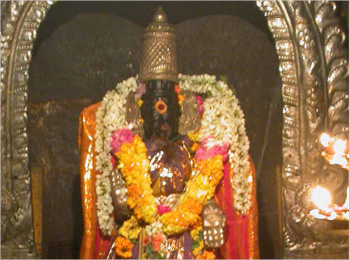 The temple is 475 feet east to west and 250 feet south to north, with a fortress of 30 feet in height. The temple covers an area of 3 acres and has a big seven tiered pagado. The fortress of the temple is beautifully fashioned out of artistically carved granite stones. On the outer walls, there are several carvings, a separate line for Horse, Bull and pig all around the wall. The north and south entrances are closed for the devotees. The eastern in front of it, there is a high four pillared mandapam. Adjacent to it, is the "Thermutti Mandapam" Unlike other mandapams, which will have only a single flight of steps on one side, here there are two flights of steps on both sides. There are several sacred theerthas in this shrine. The brahma theertham is inside the temple while the Navagraha Theertham is located at the foot of the hill which is now known as Periayappan kulam. To the south east of this sthalam is the Agni Theertham with Neerazhi Mandapam at its centre. People call this Agni Theertham as Kaatan kulam. There is a Murugar Temple at the top of a hill lock on the bank of theis Agni Theertham and to the west corner is the Devaraidyar Theertham and to the west the seyyyan kulam or seeyan kulam. There are also several other small Theerthams here all round the hill. On all Tuesday it is customary for the devotees to come around the hill and offer worship to Sri Kanakagiriswarar. By doing so, it is believed that the devotees who are suffering from incurable diseases are easily cured.

Once Parvathi devi came to Devikapuram during the pralaya period. She saw a small hill was coming down with a golden shine floating in the pralaya floods which stayed here as Golden hill. Parvathi devi then stayed here and worshipped Lord Shiva at the hill with the Kasi Viswanathar lingam on a Shivarathri day and Shiva appeared to Her as a Swayambu lingam. Devi stayed at the Periyanayahi amman temple exclusively.

The nearest airport is at Chennai. Polur is the nearby Railway station. Services have been resumed after the conversion of track. Devikapuram is located on State Highway 115. This village can be easily reached by bus from Chennai (150 km), Thiruvannamalai(50 km), Arni (21 km), Polur (14 km) and Vellore (60 km).