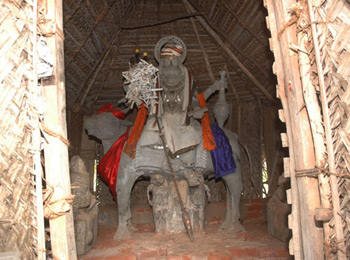 The God of Death is the presiding deity of the temple appearing with a royal look with his twisted moustache in a sitting form on his buffalo vehicle. He holds in his hands a rope, palm leaves and a club. Seated under him in the shrine are Chitra Gupta and his messenger named Kalan, Pambatti Siddhar and Aiyanar with his consorts Poorana and Pushkala. Raw rice pudding is offered as Nivedhana. Yama is dressed as a king during the 10 days Aadi festival as if he is going for hunting.

In order to reduce the degree of his fury, Lord Raja Ganapathy is installed in front of the shrine and Lord Baladandayuthapani behind. As Yama is the form of Justice, any one committing a sin would be suitably punished. Women do not bathe in the theertha of the temple in the fear that they may be subjected to the fury of Yama.

Once, the Devas of the celestial world came to Kailash to have the darshan of Lord Shiva. As He was in deep meditation, they used Manmatha to disturb His medidatation-Nishta. Opening His eyes in all fury, the sparks burnt Manmatha reducing him to ashes. Responding to the prayers of his wife Rathi, he was restored to life at a spot near this place. Yama prayed to Lord Shiva to permit him the destruction job assigned to him and was granted permission. The temple for Yama is built according to this story.

Lord Shiva blessing Yama to carry on his job, has a separate temple nearby.

10 days Aadi Vizha in July-August and Manmatha Vizha (cupid festival) in Masi (February-March) are the festivals celebrated in the temple.

The Yama temple is 36 km from Thanjavur on the Pattukkottai route. The nearest bus stop is Tiruchitrambalam.

The Nearest railway station is Pattukkottai and Thanjavur.

The Nearest Airport is Trichy.