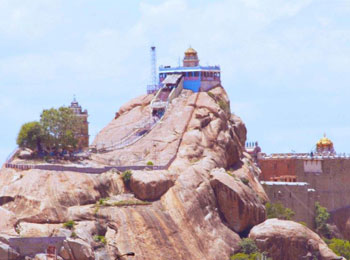 The Thaiyumanavar Temple is a temple situated in the Rock fort complex in the city of Trichy, India. The temple is situated close to the base of the Rock fort and was constructed by the Pallava king Mahendra Varman I in the 6th century AD. Shiva is worshiped as Thaiyumanavar, and is represented by the lingam and his consort Parvathi is depicted as Mattuvar Kuzhalammai. The presiding deity is revered in the 7th century Tamil Shaiva canonical work, the Devaram, written by Tamil saint poets (Nayanars) and classified as Padal Petra Sthalam. 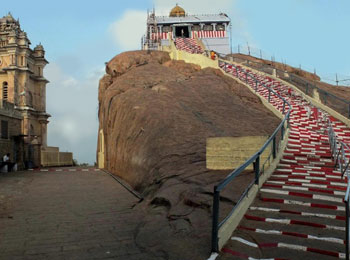 The temple complex has three shrines, two of which are dedicated to Lord Ganesh, one at the foothill and the Ucchi Pillayar Temple at the top. The Thaiyumanavar Temple is between them. The Thaiyumanavar temple, the largest of the three, houses a shrine for the Goddess as well as the main deity. The Rock fort is visible from almost every part of the city's north. The Teppa kulam at the foot of the Rock fort is surrounded by bazaars. It has a mandaba at its centre and has facilities for boat riding. The temple is located halfway up the Rock fort. There central shrine of Thaiyumanaswamy is located a level up of the lower half which houses the shrine of Mattuvar Kuzhalammai. It also houses niches of Vinayagar, Arumugar, Navagrahas and Veerabadhra swami. The walls around the central shrine house the image of Dakshinamurthy, Somaskandar, Natarajar, Surya, Brahma and Durga.

According to Hindu legend, a pregnant woman named Rathnavathy was an ardent devotee of Shiva. While nearing labour, she requested her mother to come over. Her mom could not reach on account of heavy floods in river Cauvery. As delivery time came closer, Rathnavathy prayed to Shiva. Shiva, moved by the devotion of Rathnavathy, took the form of Rathnavathy's mother and helped with her smooth delivery. After the delivery, Shiva vanished and Rathnavathy's mother who arrived later. The family came to know that it was Shiva who attended to the delivery. Henceforth, Shiva in the temple came to known as Thaiyumanaswamy, meaning the Lord who could act like a Mother. The temple obtained the name from the presiding deity, Thaiyumanaswamy.

Trichy was a part of the Chola kingdom. It houses a number of exquisitely sculpted temples and fortresses, the centre of which is the Rock fort temple. The temple is built in the Dravidian style of architecture. The rock-cut cave temples of the Rock fort, along with the gateway and the Erumbeeshwarar Temple, are listed as monuments of national importance by the Archaeological Survey of India.

The Rock fort is a fortress which stands atop a 273-foot-high rock. It consists of a set of monolithic rocks accommodating many rock-cut cave temples. Originally built by the Pallavas, it was later reconstructed by the Madurai Nayaks and Vijayanagara rulers. The major complex in the temple is believed to be built during the 8th century by the Pandian Empire. The temple is maintained and administered by the Hindu Religious and Endowment Board of the Government of Tamil Nadu.

Chithirai Brahmmotsavam in April-May; Panguni float festival in March-April; Aadi Pooram in July-August; Aipasai Annabishekam in October-November; Tirukarthikai in November-December; Panchamurthy procession on Makar Shankranti (Thai Pongal) falling almost on January 14 and Maha Shivrathri in February-March are the festivals celebrated in the temple.

Lord Thaiyumanava as His very name suggests, is the Mother of all those helpless in life. Those who had lost their mothers pray here for His grace hoping that He would guide them throughout their life. Majority of devotees pray for safe delivery of the child and welfare of mother and child.

The nearest airports are in Trichy.

The nearest railways station is in Trichy.

The temple is near the Tiruchi Chathiram bus stand.