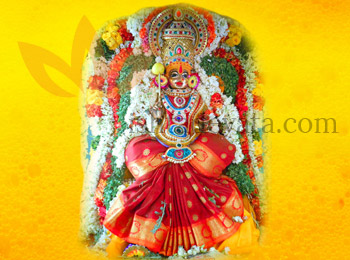 Samayapuram Mariamman Temple is a renowned shrine situated in the town of Samayapuram, near Tiruchirappalli (Trichy) in Tamil Nadu, India. 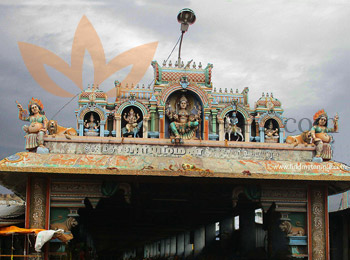 The principal deity of this shrine is Goddess Mariamman, also called popularly as Goddess Samayapurathal. The main deity’s idol is made up of sand and clay and thus the ritual of abhisheka is not performed to the Moolavar, (main idol) unlike many other Hindu deities. Instead abisheka is performed to a small secondary vigraha that is carved out of stone. This vigraha is placed in front of the main idol.

The actual history behind the temple’s origin remains unclear. The present temple structures were constructed during the early 18th century by King Vijayaraya Chakkaravarthi. The Goddess is believed to have been worshipped by locals even before the construction of this temple, but those details still remain unauthenticated. According to a legend, the current deity was initially at the famous Ranganathaswamy temple in Srirangam. When one of that temple’s chief priests believed that the idol caused illness in him, he is said to have ordered for its removal from the temple. There was a common belief of the people from that in region that such local Gods possess immense powers and so must always be appeased by making appropriate offerings and sacrifices. Thus the idol was moved out of the Srirangam town, and was later identified by some of the by passers, who is said to have built a temple for this deity called the Kannanur Mariamman temple.

Sometime around the 17th century CE, the region surrounding Trichy is said to have been ruled by the Vijayanagar kings who used the area primarily as an army base. It is believed that the Vijayanagara ruler vowed to build a temple for his goddess if they get to win the war. And accordingly they built his temple on tasting success. The management of this temple was initially under the control of the Thiruvanaikaval temple, another popular shrine in the region. Later, the control was split and presently this Samayapuram Mariamman temple is under an independent trust which is under the Government of Tamil Nadu. The trust also oversees the temple’s Annadanam scheme (an act of offering food to the devotees).

Chithirai Ther Thiruvizha (the car festival) usually falls on the first Tuesday of the tamil month of Chithirai which falls around mid of April-May. This festival is very popular among the masses that it draws more than seven lakh devotees every year. Poo Choridal celebrated on the last Sunday of the Tamil month Masi (February-March) and Vaikasi Panchaprakaram festival (May-June) are the other major festivals celebrated here. The eleven day long Thaipoosam festival, the Tamil and English New Years, Pongal and Deepavali are also observed here with various special rituals. Further all the Tuesdays and Fridays are considered auspicious for the worship of this goddess.

The following are the list of poojas offered at the temple.

Goddess Samayapurathal is believed to grant all the wishes of her devotees. After offering prayers to the goddess, many devotees volunteer to stay and serve the temple, as a thanks giving to the deity for curing them from small pox. People who are disabled and vision impaired, pray the divine Mother for getting relieved from their disabilities. People also offer prayers to the deity seeking good agricultural yields and business development.

Devotees undertake to Tonsure their heads and offer Archanas and Abishek as a way of showing gratitude to the deity. Ear boring ritual is also done here. Devotees also perform the ritual of pulling the golden chariot, carrying fire pots, performing the angapradarahana (rolling over the temple precinct), etc. They also worship the goddess offering sugarcane cradles, alighting lamps made from flour and ghee during Thaipoosam, donating paddy, grains, sheep, cocks as their prayer commitment. They also arrange for ritual of Annadhana which involves feeding the poor.

Mavilakku is a sweet dish which is made from mixing jaggery, rice flour and ghee. This Mavilaku is offered to the goddess as an important offering. Raw salt is also offered to the deity by the natives.

How To Reach Mariamman Temple, Trichy

The nearest airport is the Trichy airport.

The nearest railways station is the located at Trichy.

Samayapuram is situated at a distance of about 15 kms from city of Trichy. The temple lies just on the Trichy-Chennai highways, with frequently available state and town bus services.