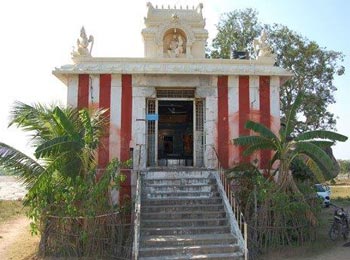 Anthili is a village to the south of Arakanda Nallur on the banks of River South Pennai. This temple is located on the river banks of Then Pennai River. The Temple is 1600 year old and is one of the four Narasimha temples in this region, the others being at Parikkal, Poovarasan Kuppam and Singiri and is part of the Eight Prominent Narasimha temples in Tamil Nadu.

On hearing the glory of this temple, Sri Vyasarajar, an enlightened soul wedded to the Madhva philosophy visited Andhili to worship the Lord. He was His Holiness Sri Raghvendra in his next birth. He was excited to see the temple built on a Garuda shaped rock. He stayed here for some time and installed Sri Anjaneya in a separate shrine behind the temple.

Lord Narayana comes to the rescue of His true devotees without any delay. He took the Narasimha Avatar (incarnation) to protect His devotee Prahladha from the hands of his father Hiranya. In his swift action, he did not wait for his vehicle Garuda but appeared instantly from a pillar and protected Prahladha. Garuda was annoyed as this was the first time that the Lord left him behind and ran so fast. He wanted to know whether he had committed anything wrong incurring the wrath of the Lord and came to Earth. He felt much distressed even then. Finally, he came to Andhili situated on the banks of River Thenpennai, venerated as Dakshina Pinahini, came to a rock and started intense penance without food and water. The heat of the penance showed its might both in Vaikundam the abode of Lord Vishnu and at Kailash the abode of Lord Shiva. All the Devas (inhabitants of the celestial world) ran to Lord Narayana for protection from the heat of Garuda’s penance. Lord Narayana appeared before Garuda and lauded his penance and offered a boon of his choice. Garuda got the boon. Based on this event, the temple is built here for Lord Narasimha with Sri Mahalakshmi sitting on His lap.

Those facing burden of debt and threat from enemies, obstacles in marriage talks, for child boon, suffering from eye disease and mentally ill pray to Lord Narasimha in this temple.