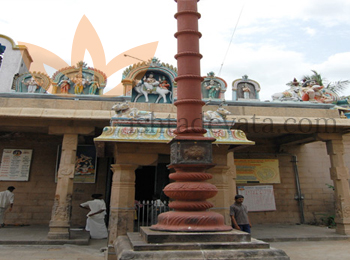 Saints Sambandar, Appar and Sundarar had sung the praise of the Lord of the temple in their Thevaram hymns. Addressing the ignorant struggling for enlightenment, Saint Gnanasambandar advises them saying, “If you wish to know what is eternal and avoid letting your legs into mud and struggle to pick it up, think of the One with Ganga on His turf gracing at Veerattanam”. This is the 11th Shiva temple in the Nadunadu region praised in Thevaram hymns.

The Ambal temple is located in a separate shrine.. Although much in need of repair, frescos on ceilings are interesting. The Rajagopuram is about 70 ft in height and the temple has 2 prakarams. Inscriptions from the Pallava period are also found here,which are of historic value. Also seen here are inscriptions from the period of Parantaka Chola I, and Vijayalaya I. The Shiva Sannidhi is far from the gate. The sthala Vriksham is the Sara kondrai.

The famous Vinayakar Agaval by divine poetess Avvaiyar dedicated to Lord Vinayaka was sung in this temple. This is the place where Lord Shiva killed demon Andhakasura. Among the eight Veeratta sthalas, this is the second with historical importance and antiquity.

The Vasthu Sastra followed these days in construction of buildings is drawn from this place.. Planet Shukra was relieved from his curse. Saptha Madhas, Mother Maha Tripura Sundari, 64 Bhairavas and 64 Bhairavis came into being from this sacred land.

Lord Muruga of this temple is praised in the Tirupugazh hymns of Arunagiriar, This is also the birth place of Meiporul Nayanar and Narasinga Munaiarayar.

The shrine of Goddess Vishnu Durgain the Prakara, with Her eight hands is looking very mercifully at the devotees and blessings. The Goddess, ensures removal of obstacles in wedding and jobs.. Rahukala puja lamps on lime cups are offered in the shrine on Tuesdays (between 3.00-4.30 p.m.), on Fridays (between 10.30-12.00 a.m.) and Sundays between 4.30-6.00 p.m.

Tirukovilur is known as the place where the wedding of the noted Tamil philanthropist and king Pari Vallal’s daughters’- Angavai and Sangavai were celebrated with efforts of great poet Kabilar and poetess Avvaiyar . Deiveekan was the bridegroom who was the king of the place. The names linked to this wedding are of the villages around Tirukovilur. This is the place where noble and reputed Tamil poet Kabilar lived and dedicated his life under a fast. The rock on which he was sitting, facing north, is even now known as Kabilar Hill.

When Saint Sundarar and Cheraman were travelling to Mount Kailash by the sky, poetess Avvaiyar was performing puja to the Lord. She was hurriedly completing the pujas as she also wanted to reach, the abode of Lord Shiva. Lord Vinayaka appeared before her and advised her not to hurry. After that Avvaiyar performed Ganapathi Puja chanting her noted Vinayagar Agaval and completed the puja patiently. Lord Vinayaka took the Vishwarupa – covering both earth and heaven and took Avvayar and left her at Kailash before Sundarar and Cheraman reached the Lord’s abode.. As He took a huge form, Vinayaka is praised as Peria Yanai meaning a huge elephant.

Lord Shanmuga wanted to perform Shiva Puja to cleanse Himself of the sin of killing the demons. Ambica showed the place where the Vel ( weapon) fell down from Her hands. Hence the place is known Tiru Kai Vel – Kai-hand and Vel a weapon. Muruga performed His puja here and is praised by Arunagiriar in his Tirupugazh hymns.

Once it so happened that the world became dark when Goddess Parvathi playfully covered the eyes of Lord Shiva which are but Sun and Moon.. The darkness gave birth to took a demon. Andhakara means darkness and also denotes ignorance. Life becomes dark due to ignorance. Lord Shiva struck the Andhaka-darkness giant on his head with a club in His hand. The head of the demon started bleeding. Every drop of blood that fell to the ground took the form of a demon and war continued. So Goddess Parvathi prevented the blood from falling down by collecting it in a bowl. The blood that fell down became 8 vertical and 8 horizontal lines crosswise and thus made 64 squares. With His power, Lord Shiva created 64 Bhairavas for each square and prevented further production of demons and blessed the Devas in the celestial world. This later came to known as Vasthu Shanti Puja for Bhairavas. This also personifies the destruction of ignorance leading to enlightenment.

Masi Magam in February-March with 10 days Brahmmotsavam gathers huge number of devotees, Aani Tirumanjanam in June-July, All Aadi Fridays in July-August, Purattasi Navarathri in September-October, Skanda Sashti and Soora Samharam in Octobr -November, Karthika third Monday in November-December with conch abishek, Margazhi Tiruvadirai and Manickavasagar festival in December-January and Aipasi Annabishekam are the important festivals grandly celebrated in the temple all year along. The annual festival is celebrated for 13 days in the month of Maasi (Aquarius) when Andhakasura Samharamurthy is taken in procession on the 6th day of the festival.

Those afflicted with black magic and spirit spells will be relieved of the evils forces and effects, after worshipping in the temple. Lord blesses the devotees with mental peace and relieves from sins of the past birth. There will be not be any worries about children because of adverse planetary situations. Any obstacles in work, especially construction work would be removed after praying here, as this place is where Vasthu Sastra was born. As planet Shukra – Venus was relieved of his curse here, no obstacle would occur in marriages.

The nearest airport is at Chennai.

The nearest railway station is at Villupuram on Kadpadi route.

Tirukovilur is on the Panrutti-Vellore route. Bus facilities are available from Villupuram. Keezhayur is very near the temple.