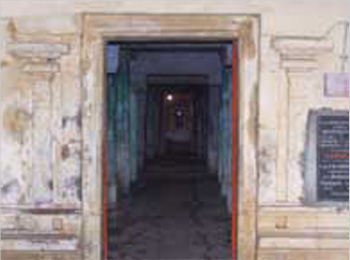 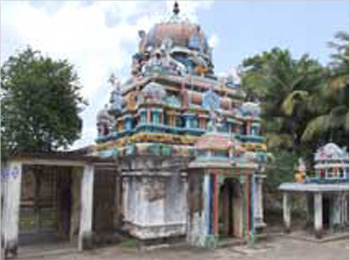 Thiruvalanchuzhi, as the name indicates (thiru - sacred, valanchuzhi - right handed curve), is a holy place where the river Kaveri takes a gentle curve hugging the divine sthala to her bosom. Adding glory to the place is the age old temple dedicated to the leader of ganas, revered in this sthala as Swetha Vinayagar or the Pure White one. The temple itself is in reality a Shivasthalam (Brihannayaki sametha Khabartheesar) and is very close to Kumbakonam.

This is the 18th Shiva temple on the northern banks of Cauvery.Adhi Murthy of the temple God Kiluvai Nathar is under Kiluvai tree in the prakara. There is also a Nandhi before Him. God Subramania with His consorts Vaiili and Deivanai is in a shrine in the prakara. Sri Vinayaka of the temple is worshipped as God Kadaimudi Vinayaka. 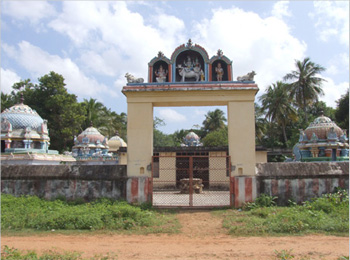 The presiding deity, Shiva, is called as Sri Kabardeeshwarar (Kadaimudi nathar) and Ambal is called as Sri Prahan Nayaki (Periyanaki Ambal). But, this temple is famous for Sri Vellai Vinayagar.

Sri Vellai Pillaiyar (Swetha Vinayakar or Nuraippillaiyaar) Temple is situated at Thiruvalanchuzhi, a village located just 6 kilometers near Kumbakonam, Tamilnadu, India. When Durvasa Muni came to visit Indra, he brought with him a garland obtained from Lakshmi. Seeing Indra riding on his Airavatha, he offered the garland as a fitting gift to the king of devas. Indra, who was in one of his proud moods, carelessly took the garland and placed it on airavatha's head. The elephant in its playful mood dragged it down and stamped on the holy garland. Anger burst through Durvasa who cursed Indra "Oh foolish proud King, You have just shown disrespect to Lakshmi herself. May all your prosperity melt away? May your strength disappear and may you rot in disrespect". Cursing thus he left the place, the devas all shivering in fear. Seeing no other go they rushed to MahaVishnu to seek his help. The ever benevolent Vishnu asked them to churn the Milk Ocean and consume the nectar obtained from it to regain the lost wealth. Vasuki, the king of snakes offered himself as the rope and the devas decided to use the Meru mountain as the churn. All preparations done they still couldn't begin, their strength all gone with the curse. Having been weakened by the curse, they alone couldn't churn the ocean. After prolonged consideration, Indra sent a missive to his step brothers, the asuras, asking them to join in this effort, promising a portion of the nectar. With the assent of the asuras, the churning was to begin. According to the legend, when the Devas and asuras were churning the ocean, they forgot to worship Ganesha. They realized their error when the poison came out, and Indra immediately made an image of Ganesha out of the sea foam which had collected as a result of the churning of the ocean. Ganesha was pleased, and the Devas were able to obtain nectar. This is the form of Ganesha present in the temple. Swetha Vinayakar - a Ganesha made of Sea Foam. Indra continued to worship the cream idol and took it with him when he went on a pilgrimage to absolve his sins. When he reached the banks of the Kaveri, he placed the idol down to take a bath and performs the ritual poojas. Returning back, he saw that the idol had firmly attached itself to the ground and refused to budge. Understanding the divine will of the God he requested that he be allowed to perform worship to Him. Vinayagar gave his approval, and happy with this, Indra returned back to Amaravathi leaving the cream white idol to be worshipped by generations of devotees in what is now Thiruvalanchuzhi. God of the temple is praised in the Thevaram hymns of Saint Tirugnana Sambandar.