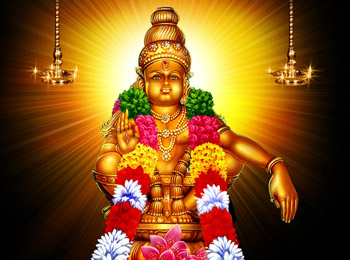 The temple of Sri Dharma Sastha is situated at Poonjar in Kottayam district of Kerala state, India. It is located close to the river 'Meenachil'. This shrine is also known as 'Kattunel kavu'. This shrine was managed by the Poonjar Koyikkal Swaroopam (Poonjar Royal family).

The chief deity in this shrine is Lord Ayyappa. In this shrine the divinity is in the form of 'Ayyan' ,the avathar of Sastha holding a 'Vedha Grandha' on the right hand. The idol is made out of 'Krishna Sila' ,which is so stunning. In this shrine there is also a rock in circlular shape, which indicates the manifestation of Goddess 'Madhura Meenakshi'. Other sub deities are 'Sundaresan' and Lord Vinayaka.

Poonjar is a big settlement in the Meechil Taluq of Kottayam district of Kerala. It appears that this village was regularly bothered by a dacoit called Udayanan. This happened during the reign of Lord Ayyappan, who was the prince of Pandalam. At that time a Pandya king, Mana Vikrama Raja, reached there from Madurai. He decided to help the villagers by putting down Udayanan. An old divine man, who came to know about this, met Mana Vikraman and gifted him an elephant a goad and a hook to control the elephants and also taught him how to defeat Udayana. As per the instruction Mana Vikrama Raja fought with Udhayana and suppressed him. Later that Pandya king acquired that area and wanted to construct a shrine for Lord Ayyappan as he easily comprehended that the old man who aided him was none other than lord Ayyappan. One day when the king went to bathe in the river, he kept his umbrella made of palm leaf on the bank, but when he came back he was not able to move that umbrella at all. Understanding that the God wanted to have a shrine there itself he started constructing it. Historic proofs show that the shrine was built in 1165 A.D. Hiring architects and artists from Madurai and Kerala.

Yearly festival is celebrated for 8 days in the month of Makaram (January-Febrary). Mandala period is also significant.

Poonjar is well linked to the other parts of the state by regular state transport and private bus services.