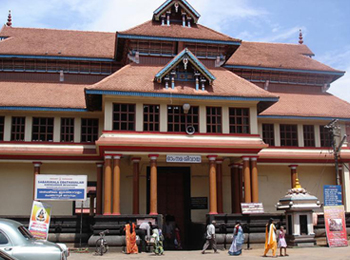 Thrikodithanam Mahavishnu Kshetram, also known as Adbhuta Narayanan Temple, is located at Thrikodithanam, 2 km from Changanacherry in Kottayam District. It is one among the five Pancha-Pandava temples in Kerala, which was built in the 9th century. This ancient temple is dedicated to Lord Vishnu, and is considered among the 108 Vishnu temples (Divya Desams) in India. 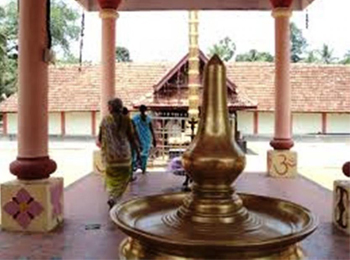 This temple is mentioned in the poems and hymns composed by Nammalvar in the year 800. The temple is famed for the beauteous mural paintings and stone inscriptions. These paintings also symbolize the essence of the bygone era. 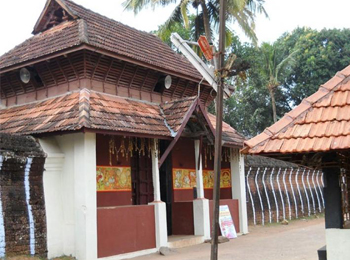 The presiding deity is Lord Adbhuta Narayanan, made of Aanjana-kallu along with his consort Goddess Karpagavalli. Other deities in this temple include Lords Krishna, Narasimha, Shiva, Ganapathy, Nagas and Kshethrapalan. According to belief, Sahadeva (youngest of pandavas) installed this temple. 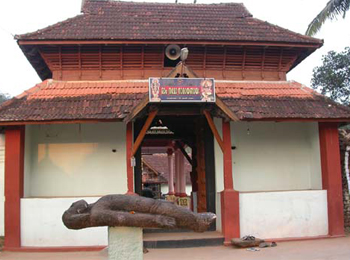 The temple has two storeys and is well-known for its architectural splendour. The base of the sanctum called the Aadhisthaana is made from three feet high granite stones. They bear 13 ancient inscriptions in the Vaatezutthu Tamil script. The sloping roof is covered with copper tile plates. Four steps of polished black granite lead to the main entrance of the Shrikovil. The space around the sanctum has a platform that is considered sacred, called Beli Kallu.

A granite statue called the Kazhivetti-kallu is positioned between the eastern entrance and the pond. The statue depicts a man lying flat on his back, held up a stone pillar around 6 feet high. The story behind this structure states that the king of the region once visited the temple for darshan but found that the doors were closed. However, the security of the temple received a bribe from the king and opened the doors. It is believed that as a form of punishment, his body is placed on a stone.

It is believed that this region was once under the rule of one Rukmangathan. His garden contained flowers of multiple varieties which were picked by Devas and offered to Perumal. When he realized that his flowers were being stolen, he ordered that the thieves be arrested and brought to him. His men arrested the Devas unknowingly and took them to the king.

When he came to know the truth, the king apologized and immediately freed them but the Devas had lost the power of returning because they were arrested by humans. The king asked how he could help them. They told him that if he agreed to part with the benefits of his Ekadasi fast of many years, they would regain power. The king agreed and donated the benefits to them. Since all this happened in mere moments (Kadigai), the place is called Tirukadithanam.

It is said that when Sahadeva was building this temple, he searched for an idol but in vain. Frustrated, he attempted to immolate himself. An idol of Lord Narayana appeared before him instantly. Therefore, the Lord is known as Arputha Narayana. The other deities include Lords Sastha, Muruga and serpent deities. The compound wall of the temple is said to have been Bhoothas who were huge creatures with extraordinary strength and menacing appearance.

The deepa (The festival of the Lamp)

The main festival Deepa is very unique. It commences on the month Vrichikam, (Thiruvonam star) with the hoisting of flags on the eastern and western sides of the Sreekoil. Unique functions starts on the fifth day onwards with processions of Moola Vigraha accompanied by elephants Jeevatha with the idol of Sahadeva inside. Seva is another ritual performed inside the temple. Only on the final day, the processions goes out of the temple.

The myth behind the festival is that when sahadeva returns triumphantly after the great war, on the way, he learned about Madri’s death. Saddened, and overwhelmed with grief, he tries to jump into the funeral pyre of Madri. The well wishers stops him and consoled him. The Deepa gets its name from the ritual of piling hundreds of Sarakudoms, one on top of the other gets lighted to represent the myth. All that is stated in the myth gets illustrated or enacted during Deepa. The burnt remains of sarakudoms becomes a prasada. When the Jeevitha enters Nalambalam, the festivities almost come to its end.

A brief function gets preformed in front of the main idol after the Jeevatha ends its journey. The people got involved in all festivities ask forgiveness to Lord Vishnu for all the knowingly or unknowingly done sins. The specific rhythm need for Aashu is made with the help of wood, chenkila and conch.

Aarrattu is the final stage of the festival Deepa. It is performed the sacred pond. The poojas after the aarrattu are performed at the permanent Aarrattu Mandapam outside the temple. The procession during aarrattu is not accompanied by elephants or any other decorated accompaniments. The Deepa comes to an end with the culmination of Aarrattu.