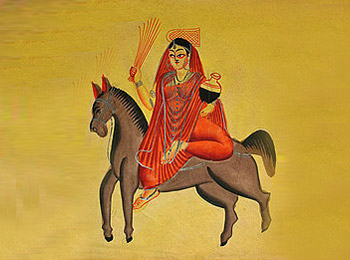 Dedicated to the dread Goddess of small-pox, Shitala Devi Temple in Haridwar is situated to the south of the Daksha Prajapati temple. The ancient idol of the Goddess enshrined here is considered to be the tutelary Goddess of Daksha Prajapati. Devotees visit this temple for three days continuously if their children suffer from small pox or measles.

One story says Goddess Durga has incarnated as little Katyayani, the daughter of sage Katyayan to destroy all arrogant evil demonic forces of the world, in her real form as Durga, she killed many demons that were sent by Kaalkeya.

A demon named Jwarasur, the demon of fever, started spreading incurable diseases to Katyayani's childhood friends, such as cholera, dysentery, measles, smallpox etc. Katyayani cured the diseases of some of her friends. To relieve the world from all fevers and diseases, Katyayani assumed the form of Shitala Devi. Each of her four hands held a short broom, winnowing fan, jar of cooling water and a drinking cup. With her power, she cured all the children's diseases. Katyayani then requests her friend, Batuk to go out and confront the demon Jwarasur. A battle ensued between the young Batuk and demon Jwarasur. Jwarasur succeeds in defeating Batuk. Then, Batuk, lying dead, magically faded into dust. Jwarasur was shocked that Batuk disappeared and wondered where he went. Then, what he doesn't know was that Batuk has assumed the form of an awful male figure. This person was three-eyed and had four arms. He held a battle-axe, sword, trident and demon head. He was pitch-black in colour. His hair was flowing. Eyes blazed with fury. This figure wore a tiger-skin and a garland of skulls. Batuk assumed the form of Lord Shiva's ferocious form, the terrible Bhairav. Bhairav reprimands Jwarasur and tells him that he is the servant of Goddess Durga (incarnate as Katyayani). A long discussion ensued but then converted into battle. Jwarasur created many demons from his powers but Bhairav managed to destroy all of them. Finally, Bhairav wrestled with Jwarasur and killed him with his trident.

The worship of Shitala is conducted by both Brahmins and pujaris. She is primarily worshiped in the dry seasons of winter and spring. There are many arti sangrah and stuties for the puja of Maa Shitala. Some of them are Shri Shitla Mata chalisa, Shitala Maa ki Arti, Shri Shitala Mata ashtak, etc.

How to Reach Shitala Devi temple

The Nearest railway station is Kankhal.

The Nearest bus stop is Kankhal.