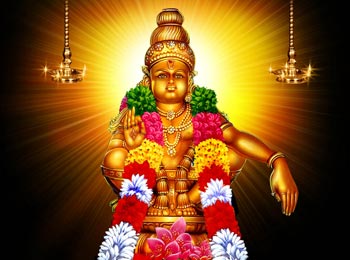 The Lord Sastha (Ayyappa) is the principal deity. Goddess Bhagavathy and Lord Subramanya are the other deities.

The legend of the temple is associated with the Sastha temple at Chambravattom in Malappuram District. The Sastha of Chambravattom was voyaging towards north. When He achieved Chandragiri, he was pulled in by the beautiful excellence of the place and settled there in a forest. The woods belonged to a renowned tharavad of the locale and they sanctified the icon of Sastha and venerated as their family god. Later a temple came up there. At the point when the temple of Bhagavathy at Chembarikayal was sub-converged into ocean, the icon of the temple was conveyed to the Sastha temple and sanctified in a different sanctorum. It was a family temple of Valliyodan tharavad till 1955 and from then on the Hindu Religious and Charitable Endowment Department assumed control over its organization. This temple had been committed to Lord Shiva's child. The presiding deity is in the form of Lord Kirata, one of the Avatars of Lord Shiva. Men and ladies wear beautiful outfits and visit the premises of the temple. They offer worship as well as bid for a brilliant future and an upbeat presence. Lord Shiva is extremely altruistic and exceptionally loves his devotees. He is additionally said to soothe them of every single common agony and shameful acts.

How To Reach Kasargod

As such there is no airport in Kasargod District but the nearest airport is in Mangalore is almost 70 kilometers away. One can easily board bus or taxi to reach Kasargod. One can also access the district via railways as Railway line passes equivalent to the coastal line. Kasaragod is well connected to other major cities of the country via regular buses.