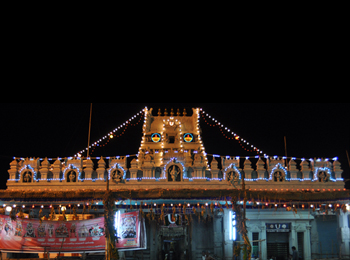 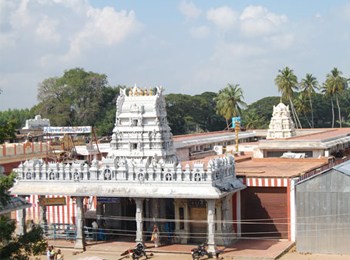 The pujas are done here as per the Vaikanasa tradition. The temple has three "choultries" and one for the mentally unsound to stay. It is believed that staying at this temple for 48 days and taking the "Theertham" twice a day will cure mental illness. Gunaseelam is a small hamlet, about 16 kilometers away from Tiruchirapalli, on the Salem - Tiruchirapalli road. It is the site where the Rishi Gunaseela performed penance. 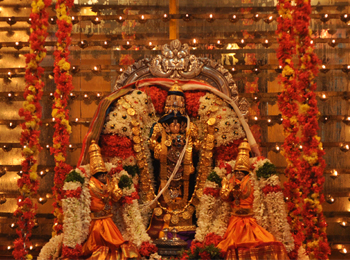 The God here is known as "Prasanna Venkatesa Perumal" and it is believed that those who are not able to visit Tirumala can obtain the grace of God Venkatachalapathy here. 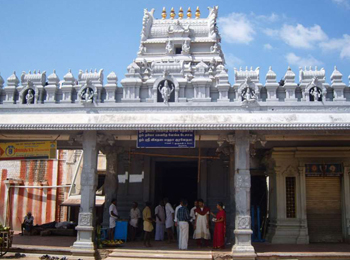 Gunaseela once went on a pilgrimage to the Seven Hills to have the darshan of God Venkateswara. He was so moved that he pleaded with the God to go with him to his Ashram, as he felt that he could not stay away from him anymore. The God who is ever moved by the true love of his devotees spoke to Gunaseela and told him that as he was in a state of debt and he could not leave Tirumala. He directed Gunaseela to perform penance at the Banks of the Cauvery and upon which Vaikuntavasa Shri Narayana would appear. Gunaseelar did as the God had directed and many years later in Krtha Yuga on a Saturday in the month of Purattasi on the day of the star Sravana, God Venkatachalapathy appeared in the ashram of Gunaseela as a Swayambhu. Gunaseela was extremely pleased and spent his days performing pujas to the God. Being the disciple of Saint Sreethalpya he was adept at taking care of his guru, who bestowed Gunaseela with all the superior knowledge. Once his guru expressed his desire to go to Badrinath to perform penance and wanted Gunaseela to accompany him. Gunaseela was in a dilemma as he could feel the guru's desire but did not want to forsake his God who came to his abode. The God ever so compassionate was moved to hear his devotee's prayer asking the God to clear his mind and make him take the right decision. Since the God cleared his mind, Gunaseela prayed that all those who prayed at this place should be ridden of delusions and blessed with clarity of mind. This is why people believe that insanity can be cured at this temple. The rishi left the God to be taken care of by a little boy, who would perform the pujas and take care of the vigraha. Unfortunately the boy grew afraid of the wild animals and the swirling waters of the Cauvery that he fled the place. Over time an ant hill grew over the vigraha and serpents lived on it.

During that time a local king Gnana Varman, who had his capital at Uraiyur, had established his cowshed near the present Gunaseelam. One day the cowherds noticed that the level of milk in the milk jugs had gone down mysteriously. The puzzled cowherds reported this to the king and he himself witnessed the mysterious disappearance of the milk. At that point an old Brahmin appeared and told the kind that if the anthill was dissolved with milk, the king could see the God himself. The anthill was then dissolved with milk and God Venkatachalapathy with a conch, discus, whip and scepter was revealed. The God blessed the King who immediately took upon himself the task of constructing a temple. In Bhavishyotra Puranam, one finds reference to the significance of this temple in Gunaseela Mahaatmiyam. Thaalpiya Maharishi along with his disciple Gunaseela Rishi once went to the Himalayas. On his way back, Gunaseela Rishi stayed back at Tirupathi and was so attracted to God Venkatachalapathy that he wanted the God to appear in Gunaseelam and bless the devotees. He came back, bathed in the Cauvery and undertook severe penance here in his ashram in Gunaseelam. Impressed with his sincerity, the God appeared before him along with Goddess and promised to remain here till the end of Kali Yugam. Pleased with the darshan of Prasanna Venkatachalapathy, Gunaseela Maharishi continued to offer his daily poojas to the God from his ashram here.

At the end of the Dwapara Yugam, the Gunaseela Maharishi’s Guru wanted him to go to Naimisaaranyam. Gunaseela Rishi designated his young disciple to continue the daily poojas. However, floods in the Cauvery and dangerous animals in the forest led the disciple to flee the place and thus the poojas came to an abrupt end. The God decided to hide himself in a pit. After several years, Chola king Nyana Varma, who ruled this place with Uraiyur as the capital, used to visit Gunaseelam regularly. Every day, cowherds would milk the cows from near the pit and carry the milk all the way back to his court. One day, to everyone’s shock, the milk that was filled to the brim of the pot vanished all of a sudden. An invisible voice wanted the king to dissolve the pit by pouring milk. The king brought in his army and used thousands of litres of milk to complete this exercise. Once dissolved, Vaikunta Vasudevan is said to have appeared before the king as Prasanna Venkatesan. As per the king’s wishes, the God agreed to remain here till the end of Kali Yugam and help fulfil all the prayers of the devotees, who visit this temple. Delighted at the darshan of Prasanna Venkatachalapathy, the king shifted from Uraiyur to Kallur, (this place was then called Badra Chakra Pattinam near Gunaseelam and built the beautiful Gunaseelam temple and laid down the process of the daily poojas as directed by Prasanna Venkatesan. He also allocated a lot of land for the temple as well as funds to undertake the daily pooja formalities. 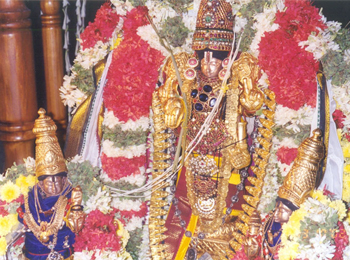 The temple rituals are performed six times a day; Ushathkalam at 6:30 a.m., Kalasanthi at 8:30 a.m., Uchikalam at 12:30 p.m., Thirumalvadai at 5:30 p.m., Sayarakshai at 6:00 p.m. and Ardha Jamam at 8:30 p.m. Each ritual comprises four steps: abhisheka (sacred bath), alangaram (decoration), naivethanam (food offering) and deepa aradanai. Since Tirupathi Lord himself appeared before Gunaseela Maharishi, it is believed that those who are not able to go to Tirupathi can visit Gunaseelam and all their wishes are said to be fulfilled here. During the Uchikalam and Arthajamam, water is sprinkled on devotees, which is believed to expel evil diseases and mental diseases. 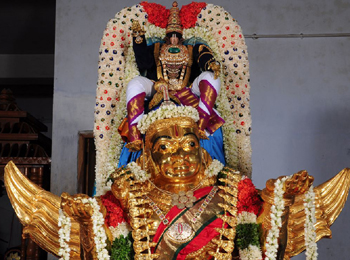 1. Take Namakkal/Salem bus from Trichy (about 45mts)
2. Car from Srirangam will cost about Rs.400-500. One can also visit Thiruvellarai and Uthamar Koil Divya Desam while visiting Gunaseelam.