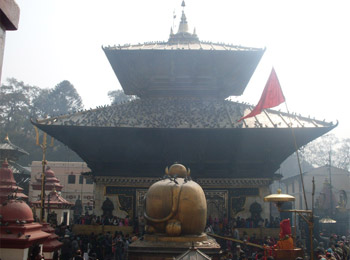 This is one of the most sacred Hindu temples located in Nepal. The temple is located on both banks of River Bagmati on the eastern outskirts of Kathmandu. 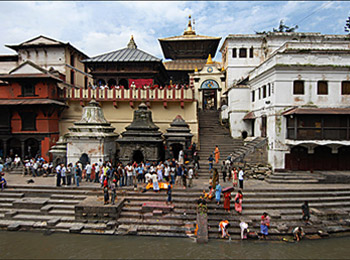 Pashupatinath is the most important temple dedicated to Lord Shiva. Every year, this temple attracts hundreds of Hindus. The main temple of Pashupatinath is a building with a bunk roof and a golden spire. It is a cubic construction with four main doors. It is entirely covered in silver sheets. It is located on the Western bank of Bagmati and is considered a masterpiece of Hindu architecture. 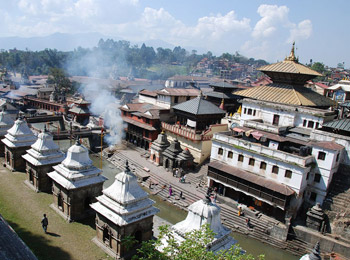 The main deity holds the lingam, the symbol of Lord Shiva - lingam (erect phallus). Lingams can be found all over the complex. 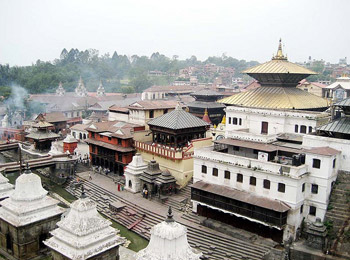 The earliest evidence of the temple’s existence dates back to 400 A.D. The current main temple of Pashupatinath complex was built in the end of the 17th century to replace the previous one, destroyed by termites. Countless number of smaller temples were constructed around the main temple on both banks of Bagmati River during the last few centuries. There are numerous legends, connected with the construction of the temple. The most famous one claims, that the temple was built on the site where Shiva lost one of his antlers, while he was in the guise of a deer. He and his wife arrived to the bank of Bagmati and amazed by the beauty of the site decided to change themselves into deer and walk in the surrounding forests.

After a while, gods and humans decided to return them to their duties, but Shiva rejected to return and they had to use force. In the fight Shiva lost one of his antlers, which later became the first lingam worshipped by Hinduists in Pashupatinath. Later this relic was lost, and according to another legend, found again by a herdsman, whose cow showed the location of lingam by irrigating the place it was buried with her milk. 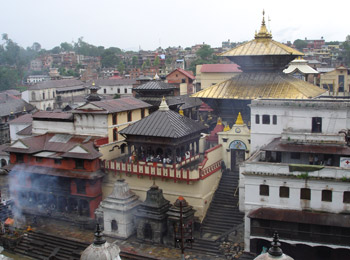 In this festival, people go to Pashupatinath the previous night of Balachaturdasi and spend the whole night in temple. During this time, they sing Bhajans (the songs written on the greatness of God) whole night and entertain themselves. Near the Pashupatinath temple there is one forest named "Slesmantak" Forest. And on this day, people go there and plant seeds of different types of plants . This is also called as "Saadbiu", Saad = good, biu = seeds.

The word Shivaratri has a very distinct meaning. Shiva means Lord/ God Shiva and ratri means "night". So, this day is whole dedicated to Lord Shiva. This is the public Holiday in Nepal.

Every morning the west door of the sanctum opened by the bhandaris ( Stoke ¨C Keepers) at 4.00 AM ,from when worship of pashupatinath begins.At 9.30 Am in the morning the other Three doors of pashupatinath Temples are also opened. After bathing the lingam of pashupatinath with holy water, sacred worship by panchamrit Abhishek (consecration by ghee , milk , honey , sugar and curd) is done by the priests. Between 1.00 to 1.30 PM in the afternoon , the lingum of Pashupatinath is elegantly dressed up in gorgeous costume, made of brocade set with tripunda ( sndal paste mark) chattras (umbrellas ) are also placed on the four heads. On the top head of pashupatinath , the graphic Shri Yantra is drawn with the sandal paste. Aarti is performed then. Later Bhog is offered to pashupatinath. In the evening Aarti of pashupatinath performed once again After dusk.

One can take a train from Delhi to Gorakhpur. Alternatively, one may take a bus or jeep from Gorakhpur to the Nepalese frontier at Sunauli (Indian side) and Bhairawa (Nepalese side, often also called Sunauli). ...Walk across the frontier, it's then a few minutes’ walk to the Bhairawa bus station. The only international airport in Nepal is Kathmandu’s Tribhuvan International. There are flights to Kathmandu from around the globe. Within Nepal, most areas are connected by air, even though some by small aircrafts on little runways.