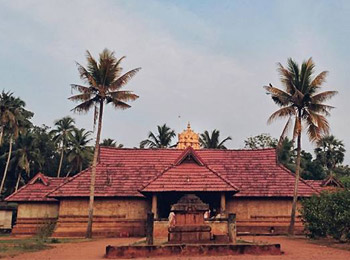 Sree Parthasarathy Temple is a historically significant temple situated at a village named Parthivapuram, in the suburb of Munchirai, near Kanyakumari, Tamil Nadu. Parthivapuram is a calm village that lies around 10 kms west of the town Marthandam and five miles south-east of Kuzhithurai in the Kanyakumari district of Tamil Nadu, India.

The temple complex covers an area of about 2.50 acres. This west facing shrine has a three tired vimana that is built on a square plan from adhishtana to sikhara. The adhishtana is made up of granite. The pranala is in the form of a fluted shaft with a curved lotus bud end that appears out of the simha mukha. One can find the Bhutha Ganas seated below the pranala.

The temple walls are made of granite blocks with few portions of it plastered with lime. Floral design is also carved on the temple walls with a simha mala at the top. The niche in the walls is literally non-functional and doesn’t hold any deity.

A square shaped sanctum sanctorum (garbha griha) is found at the centre of the temple complex with pradakshina patha (path for circumambulation) all around it. There is a mukha mantapa with an attached portico made of granite and has a tiled roof. A Namaskara Mandapa seems to have been built later in front of the portico and has four granite pillars on all the four corners. In between them on the four sides are wooden arches supported on wooden pillars. The Namaskara mandapa has no ceiling as such, but the wooden rafts converge on the roof top, covering the Mandapa from top.

The mukha mantapa has three entrances from the west, north and south directions. The southern entrance leads to the thitappally (temple kitchen). The portion above the entablature in the main vimana is constructed of brick. The second tala has deities placed at four cardinal nooks; Brahma on the north, Indra on the east, Dakshinamoorthy on the south and Narasimha on the west. These images are made of stucco. The stupi crowning the edifice is of metal. There are four small turrets on the four corners of the vimana.

The temple encompasses six sub shrines with the Sri Krishna shrine being the oldest. This shine in located in south-west corner of the temple complex, built in the Dravidian style. It is also an example of sama-chaturashra vimana, with square griva (neck) and sikhara (roof above griva), the latter as usual pinnacled by a stupi (finial). A small mukha mantapa extends out from the Lord’s saanctum to the east. The vimana over Sri Krishna’s shrine has a well-crafted Mriga mala (animal chain) at its lower and the subsequent upper level. This temple is believed to be from the 9th century AD and stands as the finest examples of such mriga mala exposition.

The sub shrines of Sri Varaha Perumal and Vadakkum Perumal (Vishnu) is found on the north side, while Sri Karakandiswaram Siva shrine is found on front of Krishna temple in the south side. Sri Sastha and Dakshinamoorthy grace from their respective shrines located in the west side of this temple complex.

Tamil inscription with Vattezhuthu scripts are found engraved at the northern side of the Naalampalam’s entrance which mentions about the grants made by a ruler called Varman, from the Valluvanadu which is presently in the Malabar region.

T.A.S. Vol. III, p.53 states that Valluvanadu was once one of the most ancient territories divisions of Chera country. This inscription stands proof to the reach that Chera rulers had on regions even far away. References to a fort and a moat surrounding the land, along with this Parthivasekharapuram temple are found. It also informs is of the prominent men from Parthivasekharapuram who had assembled near the temple’s tank reciprocating the gifts and grants made by Keralan Aadichchan (Varman) alias Rajadhiraja ‘Valluvanaadaalvan’ of Karitturai.

The terms ‘Rajadhiraja’ and ‘Valluvanaadaalvan (Lord of Valluvanaadu) glorify the king’s royalty. The grants bestowed by the king enables the villagers to enjoy all the produces got from the demarcated land granted by him, for which the villagers in turn have to protect his fort at Kulachchai (Kulachal). It was also decided to provide one sacred lamp to the Alwar (saint) at this temple, from the income earned from within the grounds of its vast boundaries.

Another inscription belongs to 9th Century A.D found on the left of this Naalampalam (Vishnu Temple) registers the gift offered by Kaaman Tadakkan of Kunrathur, to meet the requirements for burning Karthika deepam (Novemeber/December) in this temple. The temple at Parthivasekarapuram was constructed by Karunandadakkan, an Ay chief who controlled the eastern hilly region of the Travancore State. However, current records present the donor’s name as Tadakkan not as Adakkan, thus creating ambiguity.

According to the Huzur Office (copper) plates, the temple was built by Ay (Vrishni Kula) King Karunandadakkan (AD 857 - 880) who wanted the temple to be one of the finest constructions by the At rulers. One particular Chola inscription got from the site, mentions about the installation of a deity’s silver vigraha (idol). Another record dated AD 923 reveals that a land was gifted for lighting perpetual lamps. More recent inscriptions found in the temple pertains to the 15th century.

It is said that the temple complex had a separate Padashala (Vedic University) within it, with boarding facilities for more than 95 scholars. The 9th century Ay King Vikramaditya Varaguna wanted to make this Padashala at Parthivapuram in par with the famous Kandalur sala at Thiruvananthapuram (the exact location of this university is still a matter of contest among historians). However, the Parthivapuram sala failed to raise its quality and standards, thus losing the race to the prominent Kandalur Shala at Thrivandrum. Presently, temple is a protected monument under the Archaeolgical Survery of India.

The festival of Thiru Onam which falls in the Malayalam month of Chingom (August/September) is the most important featival of this temple. Other than this, the auspiciots occasion of Ekadasi which falls every month, is considered special here, just like any other Vishnu temple. Sri Krishna Jayanthi, Deepavali and Chithira Vishu are the other major festivals celebrated in this temple.

The district of Kanyakumari in Tamil Nadu State doesn't have an airport of its own. The nearest located airport is the Thiruvananthapuram International Airport at Kerala, that is located around 90 km away from Kanyakumari.

The Kanyakumari Junction Railway Station is just 4 km away from the main bus stand. This station has numerous trains connecting Kanyakumari with major Indian cities like Mumbai, Bangalore, Chennai, Rameshwaram, Kolkata and Nagercoil.

Regular bus services are available from many major cities of South India like Trivandrum, Chennai, Madurai, Nagercoil and Bangalore to Kanyakumari.