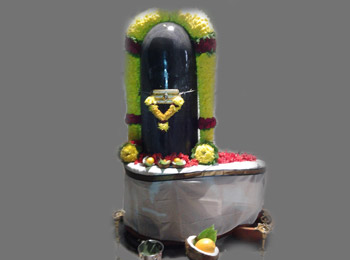 The Panchang Sivan Temple is located on the East coast highway of Kuala Lumpur/Kuatan, exit at Kuatan or the Inderah Mahkota, one has to pay the toll at the traffic light and turn right. Further drive down 14 kilometer, there will be a signboard displaying Gua Charas, which will lead to the Shivan temple. 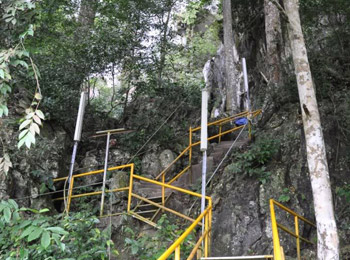 The Shivalingam in this temple is enormous inside the immaculate Charas cave. The temple is mostly crowded, and has Shaivite devotees. Nachitram, a lawyer from Negeri Sembilan in the year 1989, brought the Shivalingam here to this cave. The lawyer had visited this cave, to a Buddhist temple, which was built hundred years ago. He met an Indian sage (Siddhar) in the cave, who had advised him to bring a Shivalingam to the cave. Though he slowly forgot about the advice given by the Siddhar, one of his close associates reminded him again to complete the task. Further he flew to India and purchased the black marble Shivalingam, and got it shipped to Malaysia. Once he returned to Panching, the Buddhist in the temple informed him that there was no sign of Indian man in the cave. There are many Siddhars (Indian sages) who meditate inside the cave but rarely reveal themselves to the public, however they appear occasionally to bestow spiritual guidance. The temples President, Dr. Sethugavalar joined with the other righteous Hindus arranged workers to bring the 9 feet tall Shivalingam to the entrance of the cave, which is of around 150 feet up. From where the Shivalingam was rolled slowly inside the cave for a distance of another 100 meters to fix it and was placed facing north. The temple committee required the assistance of a leading temple builder in the country, Sthapati Thannirmalai. The sthapati once visited the temple and instructed the temple committee that the position of the Shivalingam is facing the North currently and it would be auspicious if placed in the East. He also suggested the temple committee to have a Bramapaham for the Shivalingam. As soon as they got the instructions from the stahpati, the temple committee arranged for a Maha Kumbabhishegam on 8th june 2008 with the presence of around 2,000 devotees.

The Pradosha fast and the yearly Maha Shivarathri is celebrated grandly. 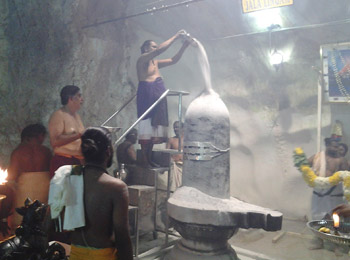 Legend has it that several devotees have witnessed the white cobra (Shweta Nag) in surroundings of this temple, and even on top of the Shivalingam. Shweta Nag is said to be a great devotees of God Shiva. This sacred cave has many natural images such as the five-faced naga (holy snake) on the roof of the cave, with the water dripping continuously on the holy Shivalingam. Also marked is a formation of God Ganesha. 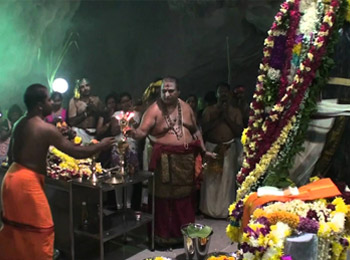 Kuantan's small Sultan Haji Ahmad Shah Airport (IATA: KUA) is about 15 km southwest of the city. The airport currently serves a few daily flights from Kuala Lumpur-KLIA (40 mins) on Malaysia Airlines. It also commences service from Penang airport via Fireflyz from March 2011 onwards. The airport also serves an international flight to Singapore by Firefly 4x a week. Kuantan's long distance bus station is located at Terminal Makmur. To/from Cherating: Catch a Sihat Bas or Mira heading for Kemaman and get off along the main road at the Cherating turn-off. The journey may take about an hour. In Kuantan, catch the buses at the local bus station on Jalan Besar. From Cherating, walk out onto the main road and wait for any Kuantan-bound (south-bound) bus. Opened in 2004, the Karak Highway and East Coast Expressway connect Kuantan to Kuala Lumpur, and the distance of approximately 250 kilometers can be covered in 3-3.5 hours. The East Coast Expressway is served by evenly distributed stop-over areas that are equipped with toilets, sundry shops and food stalls. You may exit at either the Gambang or Kuantan exit. Both expressways are toll roads to travel the entire journey via the expressways costs RM27.60 for a car. Federal route 2 also links Kuala Lumpur to Kuantan. As it is ordinary road it has no toll. However it is a somewhat slower route than the expressway as there are traffic lights along the way and a lower speed limit.