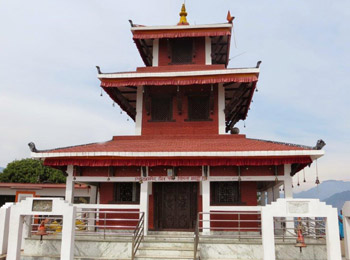 
Maula Kalika is a popular Hindu sanctuary of Goddess Kalika in Gaindakot town of Nawalparasi region in Lumbini zone of Nepal. Maula Kalika is an extremely well known and developing vacationer destination situated in Gaindakot Municipality of Nepal. Situated on the highest point of the Maula slope on the north of Narayani River (likewise called Gandaki River) in Gaindakot, Maula Kalika sanctuary is arranged 561 meter over the ocean level.Historically, it is said that in the sixteenth century the King of Palpa made a typical offering site (“Maula”) for the sake of goddess Kalika after which the name of the mountain (Maula slope) was determined.


Historically, it is said that in the 16th century the King of Palpa created a symbolic offering site ("Maula") in the name of goddess Kalika after which the name of the mountain (Maula hill) was derived. It is believed, in Hindu mythology that the Goddess Kali or Kalika also called Durga is the symbol of energy, power and new beginning. The temple has been renovated several times by the local people. The base area has been widened to adjust more visitors. The temple management has lately decided to stop sacrificing of the animals. Local people in Gaindakot have been worshiping at the Maula Kalika for many centuries before it got widespread popularity quite recently. The current temple was built in the early 1990s.


The closest domestic airport is Bharatpur Airport, where daily flights are available to and from Kathmandu and Pokhara. There is no railway system in Nepal. It's a 5-hour drive from the capital city Kathmandu.