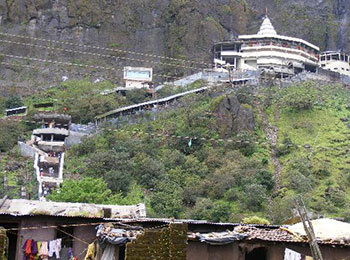 Janasthan Shakti Peetha is the most famous Shakti Peetha where it is said that the “Chin” of Maa Sati fell and the idols are Devi Maa as Bhramari and Lord Shiva as Vikritaksh Bhairav. Other names are Devi as Chibuka (the one with the chin) and Shiva as Sarvasiddhish ( one who bestows all desires). The Goddess is also known as Goddess Saptashrungi (meaning Goddess with seven arms)located in Vani, Nasik, Maharashtra, India. According to Hindu tradition, the goddess Saptashrungi Nivasini dwells on the seven mountain peaks (Sapta means seven & shrung means peaks) located in Vani, a small village near Nashik in India. Devotees visit this place in large numbers every day. 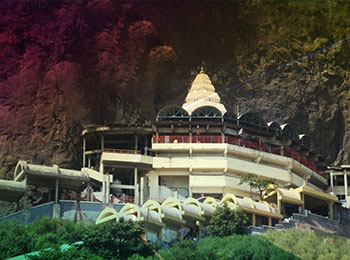 Bhramari Devi’s idol is dark in colour and thus considered as Goddess Kali. The Goddess is described as “as brilliant as a million dark suns”. She is surrounded by black bees and holds them in her first hand, other six hands are in fear warding off and wish granting postures. She destroys egoistic demons while her bees make the Seed-Mantra “Hring”. The Devi’s idol is believed to be swayambhu (self-manifested) on a rock on the sheer face of a mountain. She is surrounded by seven (sapta-in Sanskrit) peaks (shrunga-in Sanskrit), hence the name- Sapta Shrungi Mata (mother of the seven peaks). The image of the Devi is huge-about 10 feet tall with 18 hands, holding various weapons like;- Arrow, Trident, String of Beads, Mace, Shield, Thunderbolt, Lotus, Bow,Water Pot, Cudgel, Battle Axe,Lance, Sword, Conch, Bell, Cup, Noose and Spinning Disc (Sudarsana Chakra). The idol is always coated with Sindoor, which is considered auspicious in this region. She is also known as Mahishasur Mardini, the slayer of the demon Mahishasur, who took the form of a buffalo. Hence, at the foot of the hill, from where one starts climbing the steps, there is the head of a buffalo, made in stone which is believed to be a demon. 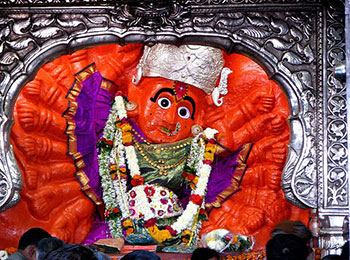 In Ramayana, there is a mention of Dandakarnya forest which is part of Saptashrungi Mountain. It is believed that Lord Rama and Devi Sita visited Dandakarnya forest and worshipped Goddess Amba. Sage Markandeya (who later came to be known as Bhakth Markandeya and composer of Devi Mahatmaym) a devotee of the Goddess Bhramari and Sage Parasher, believed to be an incarnation of Sriman Narayan, accomplished their fierce tapasya at Saptashrungi. Once a demon, or Daitya called Aruna, wanted to defeat all the Gods. He had a strange desire of not wanting to be killed by any God, any weapon, nor by any man or woman, or by any two legged or four legged creature. He medidated and prayed to Lord Brahma for thousands of years. Finally Lord Brahma pleased with his prayer granted him the boon he desired. With the blessings of Lord Brahma, the demon Aruna with other Rakshasas waged a war on the gods/ devatas to establish his supremacy on earth by conquering the Devatas. The Gods, prayed to the Mother of the Universe for help in conquering the demons. When the Goddess appeared to help the Devtaas, a swarm of black bees came out of the Devi’s body. These bees killed all the demons and thus the Gods/ devtas were saved. From then on the goddess came to be known as Bhramari Devi, or Goddess of Bees. The temple is considered as Sita Gufaa (Sita Gufaa temple complex) which is located on the western side door of Kalaram temple near Panchavati. The cave can be accessed only through a narrow passage. There is a Shiva Ling which is believed to be worshipped by Lord Rama, Lakshman and Sita during their exile. In Ramayana war, when Lakshmana was lying unconscious in the war field, Hanuman came to Saptashringi to get medicial herbs to restore his life.

The presiding deity is given a religious abishekam or bath daily, after which the goddess is dressed in new clothes. The goddess is dressed with precious ornaments like necklaces and silver nose ring etc. Special poojas are organised every Friday, Tuesday, Navami, Ashtami and Chaturdashi of each month. These days are considered very auspicious. Other festivals celebrated are the Laxmipuja (on deepavali amavasya), Gudi Padwa (New year of Marathi’s celebrated on Chaitra Shukla Padya), Kojairi (harvest festival celebrated on Ashvin or Ashwija Shukla Poornima) and Gokulashtami.

Both Navaratri and Durga Puja are celebrated with mesmerising cheer and devotion.. Kumba Mela is held in Nasik once in 12 years on the banks of river Godavari. The most important festival is the Chaitra festival which starts on Ramnavami (Chaitra shukla paksha navami) and ends on Chaitra poornima(the biggest day of the festival). During this festival childless women pray to the goddess for a child. People from nearby states attend the festival. During the festival, the goddess is given a panchamruta snan and on the penultimate day, the deity’s banner is worshipped and taken through the village in presence of the village headman (gavali patil) of Daregaon village and is hoisted on the peak of the hill at midnight. On the final day of the festival, villagers worship the deity on the hill top along with a darshan of the banner. The celebration at the temple during the Chaitra festival dates back to 15th Century.

Devotees usually offer fruits, ornaments, grains, flowers, coconuts money, silk saris, and burfi to the goddess Bhramari. Bhopas are the guardians of the temple since generations. The Saptashiti (700 verses on Devi) is also recited by many devotees.

Nashik is nearby and the best tourist destination for visitors. Nashik region is famous for grape farms and one can get many food items. Mumbai is just 171kms from here and people who come to Nashik can visit this cosmopolotan city too. Pandavleni Caves and Muktidham, are some of the interesting places to visit nearby.

The Nearest Airport is Pune and Mumbai Airport.

There are many public and private vehicles available to reach Janasthan Panchavati Temple Nasik Maharashtra.