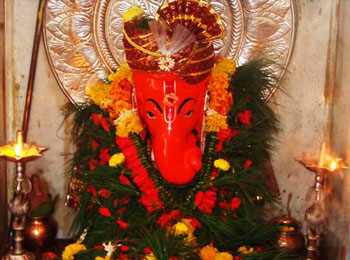 Navshya Ganpati is a popular Hindu shrine located in the Ganagapur locality of Nashik, Maharashtra. The temple was built in the year 1774 and is widely known for offering 'Jagrut Darshan' to the devotees. This sacred shrine is situated on the banks of river Godavari at Anandvalli, enroute Someshwar on the Gangapur Road. The place used to be a village in olden times, though now it falls into the Nasik city limits. History says that in August 1764, Raghoba Peshwa and his wife Anandibai were blessed with a son whom they named Vinayak. Since then, this village is known by the name Anandvalli. The couples have said to have built this temple here with the idol of Lord Ganpati being placed by Anandibai herself. Even though the British destructed the palace of Raghoba Pehwa by in 1818, the temple stood unscratched.

The temple is more than 300 years old and is one of the oldest temples of Nashik. The idol of this deity is said to be very attractive, especially the eyes look so divine and lively. The temple was named 'Navshya' as it is believed that Lord Ganpati answers to the prayers of his staunch devotees. Worshippers of this Navshya Ganpati claims to have experienced the divine blessing of the Lord. The temple is located on the river banks, surrounded by lush green fields and a river basin. The atmosphere around the temple is calm and divine. The place is perfect for those seeking meditation and spiritual awakening. The temple has been recently renovated. Devotees are found tying bells around the entrance and offering prayers in the belief that their beloved Lord fulfills their wishes.

Nearest airports are the Mumbai or Pune located at a distance of approximately 175 km.

Nashik railway station is one of the major stations of the Central Railways. A number of trains connect Nashik to other cities and towns in Maharashtra and other states of India.

Nashik is located around 220 km from Pune. Several private luxury buses and state buses are available from Nashik to cities like Pune, Shirdi, Mumbai and Aurangabad. Taxi services are also available between Nashik and Mumbai.