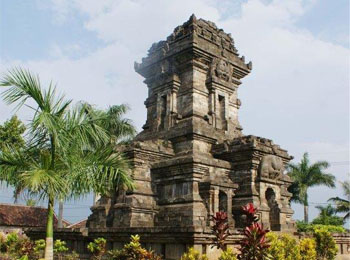 Badhut Temple was discovered by archeologists in 1923. Also known as Liswa Temple, this ancient structure is situated in Karangbesuki Village, Dau Subdistrict, Malang Regency, East Java. It is about five kilometers away from Malang municipality. It is believed that Badhut Temple was built long before Airlangga came to reign, an era in which other temples started to be constructed in East Java. 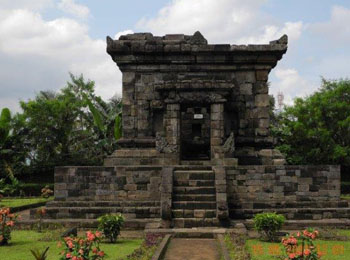 The Kalamakara, a decorative giant head carving on the entrance, makes this Kanjuruhan Kingdom temple anything but ordinary. Contrary to the common practice at other temples in East Java, the decorative giant head carvings at Badhut Temple were made without a lower jaw, typical of temples in Central Java. The shape of the temple, which is tubbier than other temples in the area, is similar to temples in Central Java. Its shape and its symmetrical relief sculptures resemble Temple Dieng (in Central Java). It is believed that Badhut Temple is a Shiva Temple, although no Agastya statue is found inside it yet. This stone structure sits on a shelf, two meters high from the ground. The shelf is very simple in design. It has no relief sculpture and the leftover space makes an open veranda 1 meter in width from the temple building. On the front side of the shelf, to the right, there is a Javanese script (hanacaraka). When the script was made is unknown. The stairs leading to the open veranda are placed at the base of the temple, at the west side, right in front of the main entrance. The carvings on the walls flanking the stairs are corrupted, making an incomplete image of vines spiraling around a man playing a flute. The passageway to the garba graha (the inner space of the temple) is adorned with a display 1.5 meters long. At the front of the passageway, there is a wide entrance decorated with a Kalamakara carving.Through the entrance, there is a room with dimension of 5.53 meters x 3.67 meters. In the middle of the room lie two fertility relics, a linga and a yoni. On the walls around the room, there are niches that used to hold statues. The walls of the temple are adorned with relief sculptures of man-headed birds and flute players. On the four sides of the shrine, there are niches decorated with flowery patterns and man-headed birds. Outside the walls of the temple, in the niche at the north side, lies a damaged Durga Mahisasuramardini statue. There used to be a statue of Shiva the Guru in the niche at the south side, and a Ganesha statue at the east side. Both statues exist no more. The temple was renovated from 1925 until 1926. Yet, it takes more efforts to restore the temple to its original design since lots of fragments of the temple are either missing or unmatched. For instance, the roof of the main building has disappeared, leaving only a flap along the top of the remaining walls. At the west sides of the front yard, lies other untouched foundation. Also, there are stones and debris scattering around temple yard, waiting to be restored.

Thus, Badhut Temple is believed to be the oldest temple in the area. Some archeologists argued that the construction of Badhut Temple was started as ordered by King Gajayana of Kanjuruhan Kingdom. As recorded in an inscription on Dinoyo stone sculpture (dated 682 Javanese year or AD 760), which was found in Merjosari village, Malang, the epicenter of Kanjuruhan Kingdom was at Dinoyo. Presently, Dinoyo stone sculpture is preserved at Jakarta National Museum. The inscription states that during the rule of King Dewasimba and his son, Sang Liswa, Kanjuruhan Kingdom enjoyed its golden age. The people loved their fair and wise kings. Legend has it that Sang Liswa, later addressed as King Gajayana, enjoyed making jokes (Javanese language: mbadhut), and when he wanted a temple to be built, it was called Badhut Temple. However, no solid evidence that relates Badhut Temple to Gajayana King has known to exist. Badhut Temple is unique not only because it is much older than other temples in East Java.

Indonesia’s main international airport is Soekarno-Hatta International Airport, Jakarta. It’s the main point of entry for much of the country, but other airports also cater to international airlines. These include Ngurah Rai (Bali) and Polonia (Medan, in north Sumatra), which are connected by air to destinations in most major cities of the world. The national carrier is the main airline linking the country to other destinations, but some other airlines also fly to Indonesia to Manado, Biak, Amban, Surabaya and Batam.

There way to go

Semarang, Jakarta, Bali, Pontianak, Tanjung Pinang, Kupang and Balikpapan are seaports for entry to the country. A number of cruise liners on the South-East Asia circuit make at least one of these a port of call.