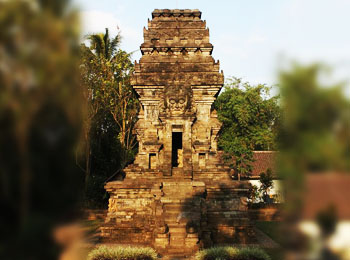 Kidal (Indonesian: Candi Kidal) is a Hindu temple in Indonesia constructed by the rulers of Singhasari dynasty. It is located in the Rejokidal village of Tumpang district in East Java, approximately 20 km east of Malang. The temple was constructed in the year 1248 CE and was later restored in the 1990s. The temple consists of three levels which are built over a raised platform. At the foot of the temple, lie three Javanese masks depicting the story of Garuda. The temple may have encased an image of Shiva depicted by the portrait of the Singhasari king, Anusapati.

The Left temple is 12.5m high and 35m wide. It is situated in the village Rejokidal, east of the city Malang in East Java region. The Left temple was built in 1248 AD, coinciding with the funeral of King Anusanatha Cradha (Anusapati) who was the successor of the King Rajasa Amurwabhumi. King the temple has encases image of Shiva depicted from the statue of King Anusupathi which is placed inside the sanctum sanctorum of the temple. The statue is not in its place anymore.

This temple is built west-facing with a height of 12.5 meters. It is estimated to have been completed around the year 1260. The Left temple is made up of a material called andesite and has a vertical geometric dimension. The foot of the temple seems a bit high. Stairs are built to climb up the temple. The staircase is so small, that it doesn’t actually look like the main staircase. The body of the temple is smaller than its foot and the roof, thereby providing a slim image to the structure. The roof of the temple consists of three sections. The top surface has a broad and unadorned roof like the Stupas. Each layer is broad and is decorated. It is said that every corner of the roof in first layer has small diamonds attached to it.

The Left temple is the only temple in Java, where a complete narrative story of Garuda is depicted. This story is engraved on the base of the temple. The story should be read from the counter clockwise starting from the southern side of the temple. The first one depicts the Garuda carrying 3 big snakes, Garuda with the pitcher described in the second, and the third shows Garuda supporting a woman on top.

There are beautiful sculptures on the eastern side of the temple. It can be deduced from the visitors’ book yan, that the temple was not as popular as the other temples like the Singosari, Jago or Jawi of that region.

Indonesia’s prominent international airport is the Soekarno-Hatta International Airport located at its capital Jakarta. There are also other airports operating international flights such as the Ngurah Rai airport in Bali and Polonia airport in Medan, located in northern Sumatra. Garuda is the national carrier which links the country with other destinations.

Other Way To Reach

Semarang, Jakarta, Bali, Pontianak, Tanjung Pinang, Kupang and Balikpapan are the various ports for entry into Indonesia. A number of cruise liners on the South-East Asia circuit are sure to make a halt in one of these ports.