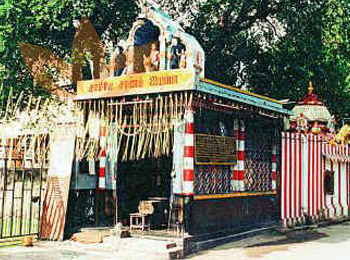 Kilpauk Ayyappan Temple is a sacred shrine situated on the Landon's Road pavement, in Chennai, Tamil Nadu. It is regarded as the first Ayyappa temple to have been built in Chennai. The temple enshrines Lord Ayyappa as the presiding deity.

The first pooja mahotsavam at the temple was performed in December, 1967, in a small thatched shed. With generous contributions from local residents, the shed made way for a brick-and-mortar structure in 1971. The temple was extended in 1995. Under the management of a nine-member registered society (Om Sri Maha Dharma Sastha Ayyappa Seva Sangham), poojas have been performed since the early 1970s by brothers K. Venkateswaran and K. Narayanan Kutty, priests from Chandanakkavu, which is near Allepey in Kerala.

Thousands of devotees visit the shrine every year during the Mandalam - Makaravilakku season for the ‘kettunira’ - the holy ghee for the Lord's abhisheks in Sabarimala Temple. The annual festival is celebrated here during December – January amid much pomp and splendour. Trikala pooja takes place here every day and so does feeding. There are special poojas, deeparadhana and bhajanas during Vishu, Vijayadashami and the Ayyappan season. During the annual temple festival in December-end, laksharchana, navagraha shanties and alankara pooja are performed. On the last day of the festival, the deity is taken out in a grand procession, followed by maha annadaanam.

The Chennai Airport is about 18 km from Kilpauk.