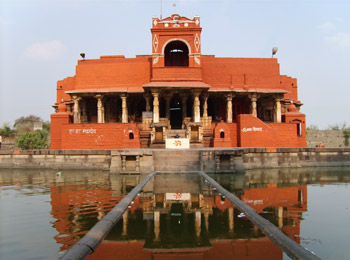 The Kankaleshwar Temple is the oldest and the most unique piece of architecture in the town of Beed. The presding deity of this temple is Lord Shiva. Historians are not sure about the period of construction this temple. The architectural style suggests that it might have been constructed during the Yadava period, most probably during the reign of Singhana (1210–47), who also founded Devagiri (Daulatabad). The design of this temple bears certain resemblances with the temples at the famous Ellora Caves. Situated at the center of a small lake in the eastern part of the town, the temple is surrounded by intricate carvings all around. A fair is usually held near the temple on the eve of Mahashivratri.

The ideal time to visit the temple is from the month of October to March.

The closest domestic airport is Aurangabad (133 km), while the nearby international airports are Mumbai (418 km) and Pune (250 km).

Beed is well connected by road to major towns in the state. The National highway no 211 that runs from Ahmadabad to Hyderabad passes through the town. Maharashtra State Road Transport Corporation buses and some private owned travel agencies offer bus services to the main cities of the state from Beed.