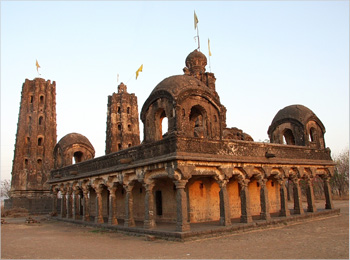 
Khandoba Temple is located on the eastern slopes in the Beed locale of Maharashtra. Constructed in Hemadpanti style, it is regularly viewed as the representative ofthe town. Two symmetrical, octagonal dipmal (tower of light) rising 21.33 meters (70 ft) are present before the sanctuary. Towers have, cut figures of people and creatures, now the greater part of them are destroyed. The directing god is Lord Khandoba - an incarnation of Lord Shiva.

There are two stories about the development of this sanctuary. One says that it was built by Sultanji Nimbalkar a Jagirdar of Nizam period. Alternate says that it was constructed by Mahadji Scindia. Tarikh-e-Bir (History of Beed) says about it with Nimbalkar.


Nearest airport is at Aurangabad with 110 km.


The closest railway station to Beed is Kalamb road (KMRD) with 75 km.


Beed is well connected by road transport to other cities.